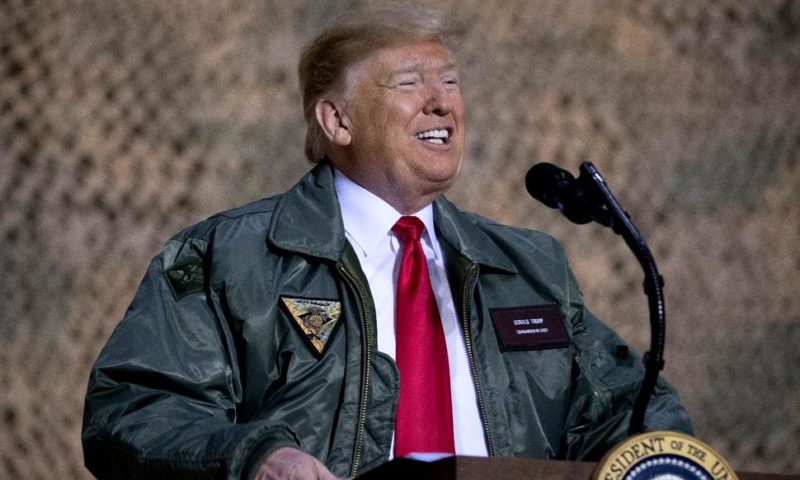 Some in parliament want a vote to expel U.S. troops from the country.

IRAQI LAWMAKERS ON Thursday called for a vote to expel U.S. troops from the country after politicians decried a surprise visit by President Donald Trump as a violation of Iraq’s sovereignty.

Politicians from the two main blocs of Iraq’s parliament backed the call and pledged to schedule a session to debate the matter, according to the Associated Press.

President Trump made the surprise visit to U.S. forces in the region on Wednesday and said he has no plans to withdraw the 5,200 troops in the country, according to the AP. Troops are stationed in Iraq as part of a coalition fighting the Islamic State group.

Checking foreign interference has been a political sticking point in the country. Supporters of cleric Muqtada al-Sadr, who has called for limiting both U.S. and Iranian involvement in Iraqi affairs, won the largest share of votes in the country’s May elections.

Trump’s visit was criticized by Iraqi politicians as aggressive and a violation of diplomatic norms.

Sabah al Saadi, leader of the Islah parliamentary bloc, asked for an emergency session of parliament to discuss Trump’s visit and “stop these aggressive actions by Trump who should know his limits: The U.S. occupation of Iraq is over,” the news agency Reuters reported.

“Trump’s visit is a flagrant and clear violation of diplomatic norms and shows his disdain and hostility in his dealings with the Iraqi government,” the Binaa bloc said in a statement, Reuters reported.

A meeting between Trump and Iraqi Prime Minister Adel Abdul-Mahdi was reportedly canceled due to a disagreement over where it should take place.

Abdul Mahdi’s office said the U.S. had informed Iraq of the president’s visit ahead of time, and the prime minister and Trump talked by telephone because of a “disagreement over how to conduct the meeting.” Lawmakers told Reuters that Trump requested that Abdul-Mahdi meet him at the Ain al-Asad military base, which Abdul-Mahdi refused.

American Becomes First to Travel Across Antarctica Alone and Unaided