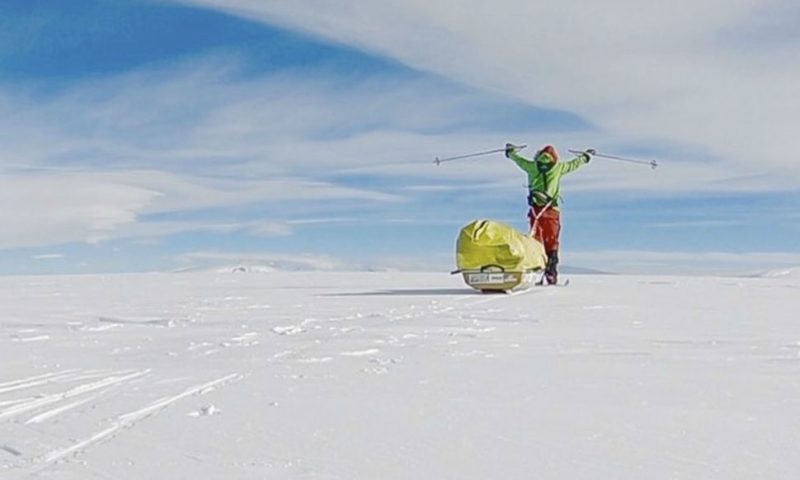 AN AMERICAN MAN HAS become the first person to successfully cross the continent of Antarctica by himself without any assistance.

Colin O’Brady of Portland, Oregon, completed his 54-day, 930-mile trek on Wednesday. Throughout the adventure, people were able to track his progress online in real time, and he documented his journey on his Instagram account, calling it “The Impossible First.”

O’Brady’s wife, Jenna Besaw, told CBS News that she spoke with her husband over the phone when he crossed the finish line. Celebratory and emotional, O’Brady, 33, exclaimed, “I did it!”

“It was an emotional call,” Besaw said. “He seemed overwhelmed by love and gratitude, and he really wanted to say thank you to all of us.”

After crossing the finish line on Wednesday, O’Brady posted a photo of himself calling his wife to his Instagram account. The post states that his last leg of the trip was a 32.5-hour trek beginning Christmas Day. He covered about 80 miles in what he described as “one continuous ‘Antarctica Ultramarathon’ push to the finish line.”

The finish line is marked by the edge of the Ross ice shelf, where the continent’s land mass ends and sea ice begins.

“As I pulled my sled over this invisible line, I accomplished my goal: to become the first person in history to traverse the continent of Antarctica coast to coast solo, unsupported and unaided,” O’Brady said in the post. “While the last 32 hours were some of the most challenging hours of my life, they have quite honestly been some of the best moments I have ever experienced. I was locked in a deep flow state the entire time, equally focused on the end goal, while allowing my mind to recount the profound lessons of this journey. I’m delirious writing this as I haven’t slept yet.”

Just two years ago, another man set out to attempt the same journey but was not as lucky. In 2016, British explorer Henry Worsley died trying to cross the icy terrain alone and unassisted.

This record isn’t O’Brady’s first. He broke two world records in 2016 when he climbed to the top of the tallest peak on each continent, including Mount Everest, in 132 days – less time than anyone had before, according to his website.