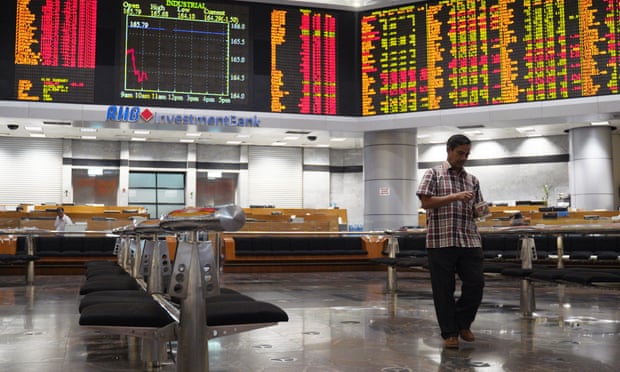 The world’s financial markets are headed into the year-end under a heavy cloud after a rout on Wall Street and political uncertainty added to heightened concerns over slowing global economic growth.

It follows a rout of shares on Wall Street on Monday and heavy selling in Asia on Christmas Day with Tokyo losing losing 5% as investors were unnerved by a US federal government shutdown and Donald Trump’s hostile stance towards the Federal Reserve chairman.

Asian shares were also shaky on Wednesday with MSCI’s broadest index of Asia-Pacific shares outside Japan dipping 0.4%. The Nikkei started the day strongly in Tokyo before heading into the red in the afternoon session and then seesawing back into the black. It dived 5% the previous day to a 20-month low and into bear market territory.

“The markets are in panic mode that the US economy is tanking, expecting the benefit of Trump’s fiscal stimulus will falter in 2019,” said Stephen Innes, head of Asia-Pacific trade at OANDA in Hong Kong.Advertisement

“If the US economy turns south, global capital markets are in for a world of hurt.”

Masahiro Ichikawa, senior strategist at Sumitomo Mitsui Asset Management in Tokyo, said: “In addition to concerns towards the US economy, the markets are now having to grapple with growing turmoil in the White House which has raised political risk ahead of the year-end.”

The president’s treasury secretary, Steven Mnuchin, had also raised market concerns by convening a crisis group amid the pullback in stocks.

S&P 500 e-mini futures moved in and out of the red and were last down 0.1%, pointing towards a subdued start for Wall Street when the US market reopens on 26 December after Christmas Day, when many of the world’s financial markets were shut.

In London, the FTSE100 is expected to fall 1% when trading resumes on Thursday.

US stocks have dropped sharply in recent weeks due to concerns over weaker economic growth. Trump has largely laid the blame for economic headwinds on the Fed, openly criticising its chairman, Jerome Powell, whom he appointed.

That has further rattled investors as they grappled with fears of slowing global growth, corporate earnings and US-China trade tensions.

In an effort to reassure investors, Mnuchin spoke on Sunday with the heads of the six largest US banks, who confirmed they have enough liquidity to continue lending and that “the markets continue to function properly”.

US bond yields have declined as the market rout, including a steep sell-off in oil, prompted investors to move into safe-haven government debt, adding to the growing pressure on the dollar.

The dollar traded at 110.44 yen after retreating to a four-month low of 110.00 overnight against its Japanese peer, which tends to attract demand as a perceived safe-haven during times of market volatility and economic stress.

The 10-year US treasury note yield stood at 2.745% following a descent on Monday to 2.733%, its lowest since early April, and signalling market expectations of a more dovish policy line from the Fed after its four rate hikes in 2018.

Asian Markets Slip on Fears of US Slowdown