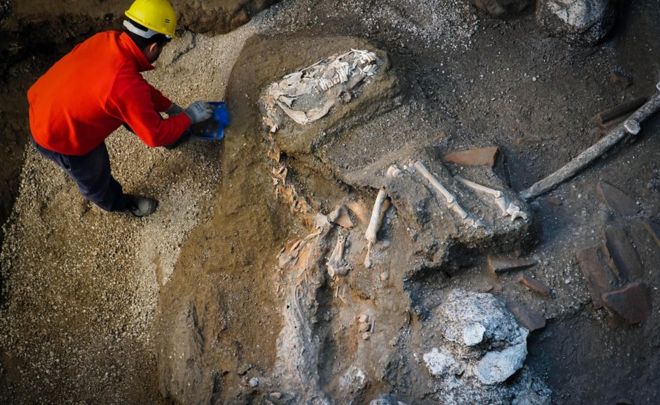 The remains of a horse still in its harness have been discovered at a villa outside the walls of Pompeii, in what archaeologists are hailing as a find of “rare importance”.

The horse was saddled up and ready to go, possibly to help rescue Pompeians fleeing the AD79 eruption of Mount Vesuvius that buried the town in ashes.

It was found with the remains of other horses at the Villa of the Mysteries.

The villa belonged to a Roman general or high-ranking military magistrate.

Mount Vesuvius buried Pompeii and other nearby towns under millions of tonnes of volcanic debris.

The latest discovery came during an excavation of a stable at the villa to the north of Pompeii, according to Massimo Osanna, the director of Pompeii’s archaeological park.

The apparently well-groomed horse, along with a saddle and a harness with fragments of wooden and bronze trimmings, was found alongside two other horses.

The horses had all come to a “fierce and terrible end”, Mr Osanna said, suffocated by ashes or by the boiling vapours from Vesuvius’s ash cloud.

The estate was originally dug up early in the 20th Century but much of it was reburied and has since been targeted by looters.

“The whole area will be excavated and returned to the public,” said Mr Osanna.

Mount Etna erupts in Sicily amid dozens of tremors