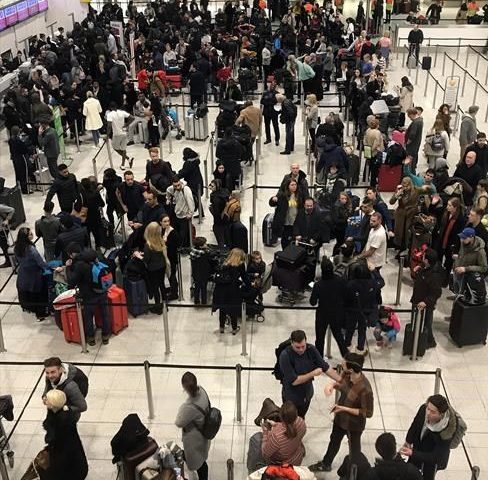 London’s Gatwick Airport was operating without problems Sunday, but the fugitive drone operators who brought incoming and outgoing flights to a standstill over multiple days remained at large — and a potential threat — after police cleared two local residents who were arrested as suspects.

Sussex Police were hopeful they had halted the disruptive and costly drone incursions during one of the heaviest travel periods of the year with Friday’s arrests of a couple who live near the airport. But they were released Sunday, and police said they were no longer suspects.

Tens of thousands of passengers suffered through long flight delays or were stranded by cancellations after two drones were reported seen above the airfield at Gatwick on Wednesday night, prompting an immediate suspension of all air traffic.

Sussex Chief Detective Jason Tingley said Sunday he could not rule out new drone activity at Gatwick or other U.K. airports. He also said it was possible that witnesses who reported sightings after the first ones aroused alarm were mistaken.

“Of course, that’s a possibility. We are working with human beings saying they have seen something,” Tingley told the BBC.

At the same, he said police were making progress in a three-pronged investigation: tracking “persons of interest,” investigating 67 reported drone sightings, and examining a damaged drone found near Gatwick.

The drone in police hands may provide useful forensic clues, such as the DNA of people who handled it, Tingley said. But the rain the London area got on Friday and Saturday might have washed away some evidence, he said.

Airport authorities consider drones a menace because they could damage a plane in flight or be sucked into a plane’s engine, causing a deadly crash

After the shutdown extended into Thursday, increased military protection was brought in Thursday night to watch for more drones while planes resumed taking off and landing at Britain’s second-busiest airport.

The government has kept the details of the security operation secret, but the military equipment is thought to offer better tracking capabilities and give authorities early warning if drones approach Gatwick, located 30 miles (45 kilometres) south of London.

At the airport on Sunday, flight arrival and departure boards showed fewer delays than on Saturday. Additional tracking gear at the periphery of the runway and an increased police presence were the only clear signs of the headaches experienced there in the past four days. But officials have stepped up surveillance of the surrounding airspace behind-the-scenes.

British Transport Secretary Chris Grayling has said the unspecified “military measures” have bolstered confidence that the airport will be able to remain open without further interruptions. But anti-drone technology is a relatively new, imperfect field, Grayling said.

It is not clear how officials will respond if another drone gets too close. The best guide may be what happened on Friday night, when the airport was shut down for 70 minutes after a drone was spotted. The military deployment allowed the airport to reopen relatively quickly, authorities have said.

No confirmed drone incursions have taken place since then — a factor that led many to assume police had found the responsible operators when they arrested the two suspects Friday night.

That hope ended Sunday when the couple — a 47-year-old man and a 54-year-old woman — was allowed to return to their home in Crawley, a 5-minute drive from Gatwick.

Detective Tingley said he is satisfied the two were not involved. He is hoping a tip will provide a crucial lead.

Tingley said police did not identify the suspects but The Mail on Sunday tabloid named them and published a large front-page photo of them with the headline, “Are These the Morons Who Ruined Christmas?”

The crisis at Gatwick marked the first time drones caused sustained disruption at a major airport. There is not much data on the dangers drones pose to airplanes because they are a relatively new phenomenon.

Police say the motive for the drone incursion is not yet known but they do not believe it is “terror-related.”

Gatwick Airport, which handles roughly 43 million passengers per year, has offered a 50,000 pound ($63,000) reward through Crimestoppers for information leading to the arrest and conviction of the drone operators.