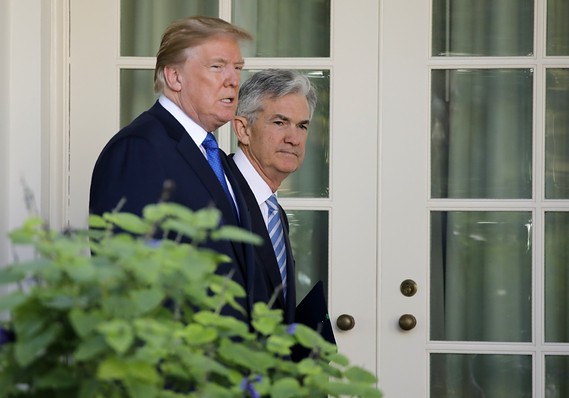 The report, based on “four people familiar with the matter,” said they were not convinced Trump would move against Powell, but that the president’s ire remained elevated over rising interest rates. Rates are climbing at the same time that the stock market SPX, -2.06%   has wiped out 2018 gains.

In a Saturday evening tweet, Treasury Secretary Steven Mnuchin said he has spoken with the president and Trump said, “I totally disagree with Fed policy. I think the increasing of interest rates and the shrinking of the Fed portfolio is an absolute terrible thing to do at this time especially in light of my major trade negotiations which are ongoing, but I never suggested firing Chairman Jay Powell, nor do I believe I have the right to do so.”

On Friday, Trump’s economic team split publicly over the Fed.

The Fed has penciled in two rate hikes for 2019. Navarro said that would be “two too many.”

“We don’t understand why the Fed is acting so contractionary at a time when there’s no inflation to worry about,” he said.

“I think the appropriate position for an economist in the White House is to respect the independence of the Fed and not comment on their policies,” Hassett said.

Earlier in the week, Mnuchin argued that the market had overreacted to the Fed decision. He suggested the Fed might be done raising interest rates. Some of Trump’s anger has reportedly been directed at Mnuchin for selecting Powell.

Experts are in agreement that Trump can’t actually fire Powell.

Central bank officials can be removed only for “cause” and that is understood not to include policy disagreements.

Mark Spindel, chief investment officer at Potomac River Capital, and co-author of a book “The Myth of the Fed’s Independence” said seemingly settled administrative case law might not stop Trump from deciding to go ahead and try to remove Powell.

“I could easily imagine the president could find a lawyer to concur that there is ‘cause’ to remove the Fed chair, like malfeasance over the economy,” Spindel said in an interview with MarketWatch. “Who is going to tell him not to do it?”

Peter Conti-Brown, a professor at the University of Pennsylvania’s Wharton School, has suggested Trump could try to demote Powell from the chairmanship even if he could not fire him as a governor. Powell wears two hats at the Fed. While he has a four-year term as Fed board chairman, he is also a Fed governor for a term that expires in 2028.

The result of trying to demote Powell would be “market chaos,” Conti-Brown said, and it is not even clear it would work, he said on Twitter on Saturday. The Federal Open Market Committee, which sets Fed policy, can elect any of its members to lead them.

Spindel said there were no scenarios under which firing Powell would leave either the economy or the president in a stronger position.

“I’m not sure the president would be better off in political, legal or financial market dimensions,” he said.

Markets would rebel if it saw the Fed as a political tool of the White House. The dollar DXY, +0.58%   would depreciate, bond yields TMUBMUSD10Y, +0.00%   would rise and the stock market would suffer, Spindel said.

Could a government shutdown affect when you get your tax refund?