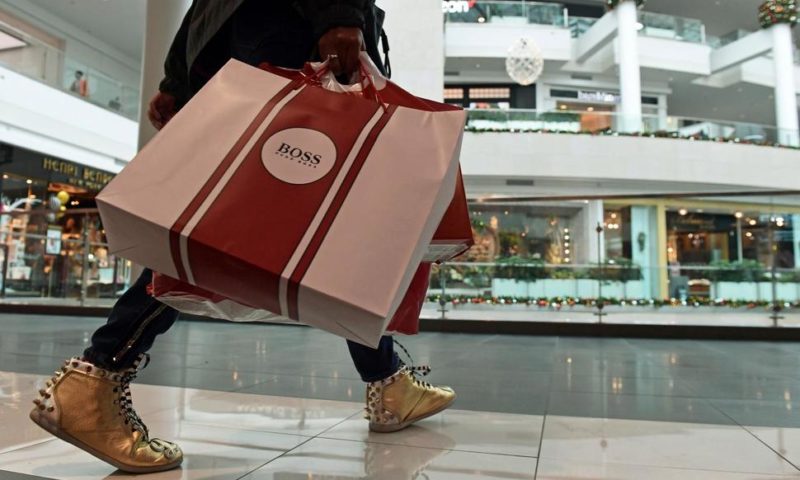 US consumer spending rose a solid 0.4 percent in November, while income growth slowed.

WASHINGTON — Americans lifted their spending 0.4 percent in November from the previous month, a moderate gain that should sustain steady economic growth.

Personal incomes rose 0.2 percent, down from 0.5 percent in the previous month, the Commerce Department said Friday.

Consumer spending jumped by the most in 13 months in October, and November’s solid gain on top of that points to healthy spending in the final three months of the year. Economists closely watch consumer spending because it accounts for about two-thirds of economic activity.

Business spending is showing signs of slowing, leaving more of the burden on consumers to power the economy. A gauge of business investment in large equipment such as machinery and computers fell in November for the third time in four months, according to a separate report Friday.

A measure of inflation tied to consumer purchases slipped, rising 1.8 percent from a year ago, down from last month’s 2 percent annual gain.

That could add to recent pressure on the Federal Reserve to pause its interest rate hikes, since the Fed usually takes such steps to forestall rising inflation. Yet with gas prices falling, inflation is likely to continue to decline in coming months.

Excluding the volatile food and energy categories, inflation rose 1.9 percent in November from a year earlier. That’s slightly faster than the previous month’s 1.8 percent but below the Fed’s 2 percent target.

The Fed raised its benchmark interest rate Wednesday for the fourth time this year but signaled its rate hikes will likely slow soon. Fed policymakers now expect two hikes in 2019, down from a previous estimate of three.

The pickup in spending is eroding Americans’ savings, suggesting that consumers could pull back in the coming months. The savings rate fell to 6 percent in November, the lowest since March 2013.

The economy expanded at a strong 3.4 percent annual rate in the July-September quarter, down slightly from a previous estimate, the government said in a separate report Friday. Consumer spending rose at a healthy 3.5 percent pace in the third quarter.

Peter Schiff says we’re not in a bear market, ‘we’re in a house of cards that the Fed built’