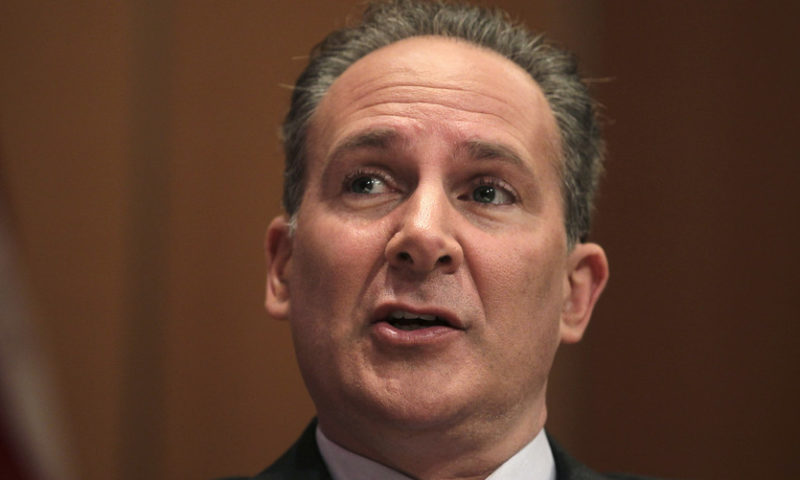 Where in the world is Peter Schiff, as the stock market entered an apparent unraveling phase?

Find the chief executive of Euro Pacific Capital, a longtime gold bug and market pundit, on a beach in Puerto Rico, where he’s taken up residence as he watches the equity market get rocked.

“I’m watching the U.S. economy implode from the beach,” Schiff told MarketWatch during a recent phone interview. “We’re in a lot of trouble,” he said.

“This isn’t a bear market, we’re in a house of cards that the Fed built,” he said.

‘This isn’t a bear market, we’re in a house of cards that the Fed built.’
Peter Schiff

Indeed, despite recent attempts to rebound, the Dow Jones Industrial Average DJIA, -1.99% is on track for its worst year since 2008 — down by about 3.5% — when the financial crisis brought global markets to their knees, according to Dow Jones Market Data. The same goes for the S&P 500 index SPX, -1.58% which would also notch its worst year in a decade, if its roughly 4% decline thus far this year hold.

Schiff is a polarizing figure on Wall Street, a man that critics say has harbored a persistent and unrealized post-crisis narrative for the Fed’s monetary policy, with predictions of soaring inflation and a dollar DXY, +0.27% collapse.

However, the prominent investor should be worthy of investors’ attention, on the back of his prescient calls ahead of the 2008 financial crisis, which earned him plaudits as one of the few able to spot a global economic crisis emanating from the housing market.

Critics often take Schiff to task for his refusal to put a date on his inflation calls.

Signs of inflation in the broad economy have been elusive still, but Schiff says inflation has taken hold in the lofty prices of stocks and other assets and predicts that they will gradually shift to higher prices for consumers.

Meanwhile, the most recent reading showed that the 12-month rate of inflation was flat at 2%, as measured by Federal Reserve’s preferred PCE, or personal consumption expenditures, gauge.

Schiff says that this time the crisis part deux will be worse and that policy makers have essentially papered over problems and set the stage for an economy that is unable to cope with higher interest rates after a decade of easy-money policies.

“Markets are starting to crack as this debt is getting more expensive to service,” he said. “We built this gigantic bubble on this unprecedented amount of cheap money and quantitative easing, and now the hangover will be much worse,” Schiff said.

Beyond the Euro Pacific investor’s disapproval of the Fed, now, critiquing monetary policy makers and Jerome Powell specifically has become a novel pastime on Wall Street.

The Wall Street Journal’s editorial board on Tuesday made the case that the Fed needs to pause its interest rates hikes, which appeared in the publication a day after the duo of hedge-fund luminary Stanley Druckenmiller and Kevin Warsh, a former Fed official, made a similar entreaty in an op-ed titled Fed Tightening Not Now.

Schiff says it won’t matter what the Fed does Wednesday (policy makers tightened as expected), with a rate increase of a quarter percentage point anticipated. “I think what’s going to happen is the Fed is ultimately going to take rates back to zero,” he said.

That sounds like a bold call, given that the U.S. economy has remained mostly strong as reflected in the jobs market, even as the rest of the globe has been consistently demonstrating signs of economic weakness. That is likely a point that the Fed may address it is policy statement, with Powell likely highlighting that the domestic economy remains healthy.