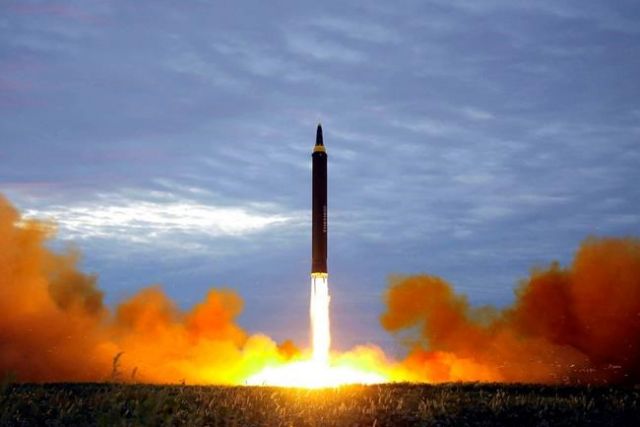 North Korea said Thursday it will never unilaterally give up its nuclear weapons unless the United States first removes what Pyongyang called a nuclear threat. The surprisingly blunt statement jars with Seoul’s rosier presentation of the North Korean position and could rattle the fragile trilateral diplomacy to defuse a nuclear crisis that last year had many fearing war.

The latest from North Korea comes as the United States and North Korea struggle over the sequencing of the denuclearization that Washington wants and the removal of international sanctions desired by Pyongyang. The statement carried by the North’s official Korean Central News Agency also raises credibility problems for the liberal South Korean government, which has continuously claimed that North Korean leader Kim Jong Un is genuinely interested in negotiating away his nuclear weapons as Seoul tries to sustain a positive atmosphere for dialogue.

The North’s comments may also be seen as proof of what outside skeptics have long said: that Kim will never voluntarily relinquish an arsenal he sees as a stronger guarantee of survival than whatever security assurances the United States might provide. The statement suggests North Korea will eventually demand the United States withdraw or significantly reduce the 28,500 American troops stationed in South Korea, a major sticking point in any disarmament deal.

Kim and President Donald Trump met June 12 in Singapore where they agreed on a vague goal for the “complete denuclearization” of the Korean Peninsula without describing when and how it would occur. The leaders are trying to arrange another meeting for early next year.

But North Korea for decades has been pushing a concept of denuclearization that bears no resemblance to the American definition, with Pyongyang vowing to pursue nuclear development until the United States removes its troops and the nuclear umbrella defending South Korea and Japan. In Thursday’s statement, the North made clear it’s sticking to its traditional stance on denuclearization. It accused Washington of twisting what had been agreed on in Singapore and driving post-summit talks into an impasse.

“The United States must now recognize the accurate meaning of the denuclearization of the Korean Peninsula, and especially, must study geography,” the statement said.

The United States removed its tactical nuclear weapons from South Korea in the 1990s. Washington and Seoul have not responded to the North Korean statement.

North Korea’s reiteration of its long-standing position on denuclearization could prove to be a major setback for diplomacy, which was revived early this year following a series of provocative nuclear and missile tests that left Kim and Trump spending most of 2017 exchanging personal insults and war threats. The statement could jeopardize a second Trump-Kim summit as the United States may have difficulty negotiating further if the North ties the future of its nukes to the U.S. military presence in the South, analysts said.

‘Alone in the world’: Canada squeezed by superpowers in Huawei dispute