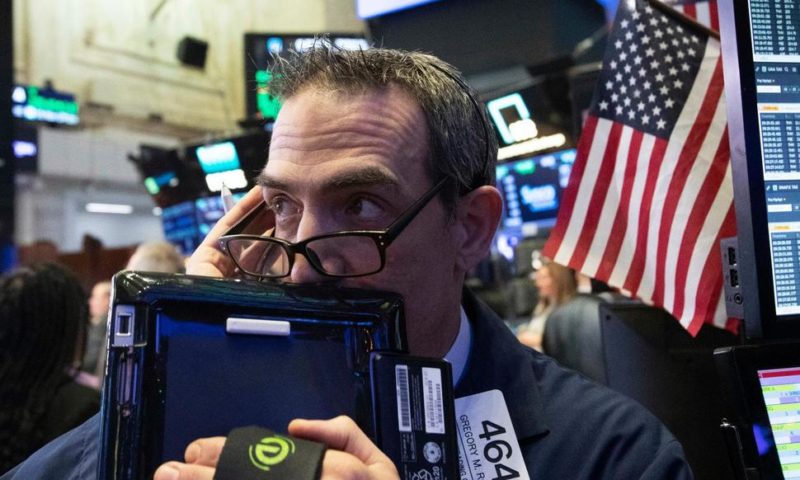 U.S. stocks sink to their lowest levels in 14 months Monday as retailers and health care and technology stocks fall.

NEW YORK — Another day of big losses knocked U.S. stocks to their lowest levels in more than a year Monday. Investors dumped high-growth technology and retail companies as well as steadier, high-dividend companies. Oil fell below $50 a barrel for the first time since October 2017.

Hospitals and health insurers slumped after a federal judge in Texas ruled that the 2010 Affordable Care Act is unconstitutional. Other stocks wobbled in morning trading, then plunged in the afternoon. The Dow Jones Industrial Average fell 507 points after a 496 point drop Friday.

Amazon led a rout among retailers and tech companies including Microsoft turned sharply lower. Some of the largest losses went to utilities and real estate companies, which have done better than the rest of the market during the turbulence of the last three months.

“That is basically retail investors panicking,” said Mark Hackett, chief of investment research at Nationwide Investment Management. “Investors basically are confusing the idea of a slowdown with a recession.”

But investors dumped almost everything. Less than 40 of the 500 stocks comprising the S&P 500 finished the day higher.

The S&P 500 index, the benchmark for many investors and funds, finished at its lowest level since Oct. 9, 2017. It has fallen 13.1 percent since its last record close on Sept. 20. The Russell 2000, an index of smaller companies, has dropped more than 20 percent since the end of August, meaning that index is now in what Wall Street calls a “bear market.”

Smaller U.S. stocks have taken dramatic losses as investors have lost confidence in the U.S. economy’s growth prospects. Smaller companies are considered more vulnerable in a downturn than larger companies because they are more dependent on economic growth and tend to have higher levels of debt.

Hackett said the current drop is similar to the market’s big plunge in late 2015 and early 2016, which was also tied to fears that the global economy was weakening in a hurry. But even though the economy is slowing down after its surge in 2017 and 2018, it should continue to do fairly well.

“It’s a slowdown from extremely high levels to healthy levels,” he said. “The globe isn’t going into a recession.”

Many experts expect the ruling will be overturned, but with the markets suffering steep declines in recent months, investors didn’t appear willing to wait and see.

Benchmark U.S. crude fell 2.6 percent to $49.88 a barrel in New York. Brent crude, used to price international oils, dipped 1.1 percent to $59.61 a barrel in London. Weaker economic growth would mean less demand for oil, and traders have been concerned there is too much crude supply on the market. That’s chopped oil prices by one-third since early October.

The Federal Reserve is expected to raise interest rates again Wednesday, the fourth increase of this year. It’s been raising rates over the last three years, and investors will want to know if the Fed is scaling back its plans for further increases based on the turmoil in the stock market over the last few months and mounting evidence that world economic growth is slowing down.

Hackett, of Nationwide, said investors will be happy if the Fed adjusts its plans and projects fewer increases in interest rates next year. But he said investors might be startled if the Fed doesn’t raise rates this week, as has been widely expected.

British Prime Minister Theresa May said Parliament will vote Jan. 14 on her deal setting terms for Britain’s departure from the European Union. She canceled a vote on the deal last week because it was clear legislators were going to reject it. May insists she can save the deal, but pressure is mounting for either a vote by lawmakers or a new referendum on the issue.

Britain is scheduled to leave the EU in late March, and if it does so without a deal in place governing its trade and economic relationships with the bloc, it could bring huge disruptions to the British and European economies and financial markets.

Japan’s Nikkei 225 index added 0.6 percent and the Kospi in South Korea gained 0.1 percent. Hong Kong’s Hang Seng was less than 0.1 percent lower. Both the Kospi and Hang Seng are in bear markets as well.

Netflix reportedly set to produce 90 movies a year, with budgets up to $200 million