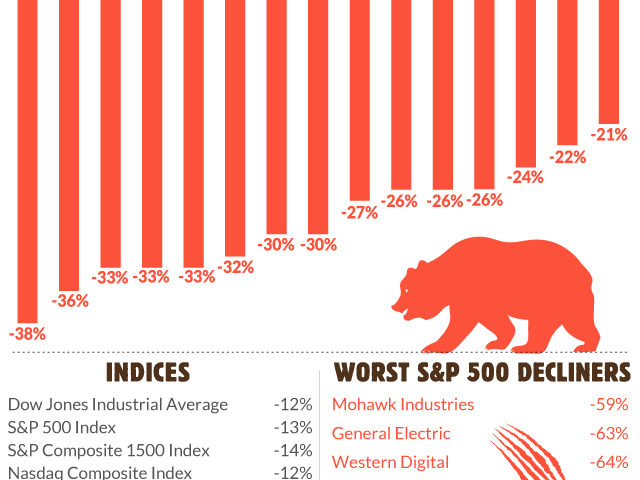 There are some BIG names in bear territory right now.

A correction is typically defined as a 10% drop for a stock or an index from a recent peak, while a bear market is a 20%-plus decrease. Data supplied by FactSet show that, as of the end of last week, 264 (53%) of S&P 500 companies are in bear markets.

With stocks closing down another 500 points on Monday and investors seriously on edge, that 53% may well keep ticking up as the week presses on.

The Dow is also on the verge of joining the S&P 500 in a so-called death cross, where the 50-day moving average — a short-term trend tracker — crosses below the 200-day moving average. Chart watchers believe that such a cross marks the point where a shorter-term decline graduates to a longer-term downtrend. The S&P 500 formed the death-cross pattern earlier in December, and a slew of other highly watched stocks have done the same over the past few months: FacebookFB, +0.97%   back in September, Netflix NFLX, +0.98%  and AlphabetGOOG, +0.65% GOOGL, +0.91%  in November, Amazon AMZN, +1.55%  just last week, and Apple AAPL, +1.04% is looking like it will also cross this week.

Though the Dow and S&P remain firmly in the correction zone, not bear territory, many of the market watchers, movers and shakers who like to comment on such things are already calling the death of the decade-long bull run, and the onset of a bear market (most recently, bond king Jeff Gundlach).