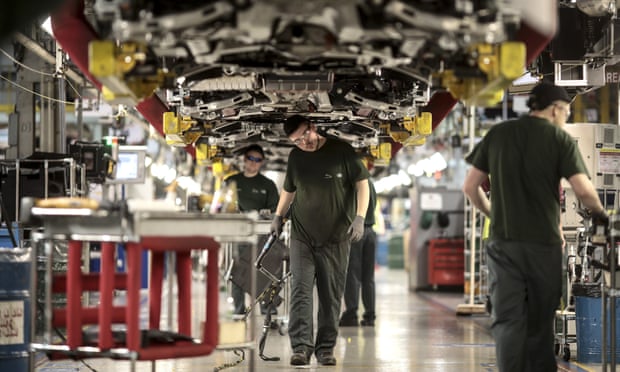 Jaguar Land Rover is planning to announce thousands of job cuts in the new year as part of a £2.5bn savings plan to ward off the threat from Brexit, falling sales in China and a drop in demand for diesel cars.

Britain’s biggest carmaker employs 40,000 in the UK and has already cut 1,000 temporary contract workers at its plant in Solihull, which builds Range Rovers and the Land Rover Discovery SUV. It has also reduced working hours for some workers, including at its Wolverhampton factory in the run-up to Christmas.

Plans for further job cuts come after the firm, which is owned by the Indian conglomerate Tata and is a major employer in the West Midlands, made a £90m loss in the three months to September, hit by falling sales in China and Europe.

In an attempt to turn around its ailing fortunes the company announced plans in October to save £2.5bn, including £1bn of cost cuts, but did not say how many jobs would be lost. However, according to a report in the Financial Times, several people close to the carmaker said JLR will outline in January the short-term element of its plan, including the loss of up to 5,000 jobs.

“As announced when we published our second-quarter results, these programmes aim to deliver £2.5bn of cost, cash and profit improvements over the next two years. Jaguar Land Rover does not comment on rumours concerning any part of these plans.”

The plan to revive the fortunes of the luxury carmaker includes a reduction in annual investment from £4.5bn to £4bn this year and next, and a reduction in the stock of finished cars it holds and its working capital by £500m. It will also cut £1bn in costs. and has already introduced a freeze on recruitment and all non-essential travel, as it battles falling demand.

The union Unite said government policy on diesel and its “botched” handling of Brexit was weighing on the hard work by staff at Jaguar Land Rover, “the jewel in the UK’s manufacturing crown”.

The spokesman added: “Unite is not aware of any further job losses to those already announced and planned for early in the new year at Jaguar Land Rover, Unite also expects ongoing transparency regarding the difficult current climate the automotive sector is operating in the UK and its impact with the company.

“Unite will continue to press the carmaker for assurances over the jobs and skills of our members who have worked tirelessly over the past decade to make the company the global success story it is today.”

World Stocks Mixed Ahead of Brexit Address; Fed in Focus