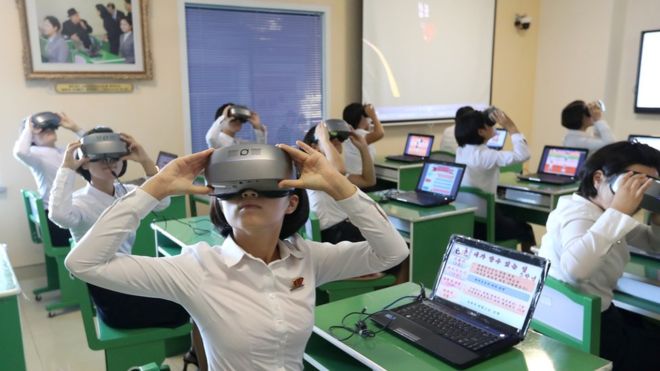 North Korea often flaunts its military hardware but of late, it appears to be making progress in developing civilian technologies – or at least is claiming to be.

As with most things in the country, it is difficult to verify these claims, but it is significant to note the importance being given to technology.

Beyond the purpose of propaganda, emphasis on the sector reflects North Korea’s desire to harness technology to improve its economy – a key goal for Supreme Leader Kim Jong-un.

One of the latest tech ventures is a new wi-fi service called Mirae, which enables mobile devices to access a state-sanctioned intranet network in the capital, Pyongyang.

State-run Korean Central Television on 8 November showed an Arirang 171 smartphone being used to access Mirae during an “Exhibition of IT Successes”.

The US-based monitoring website 38North noted that this was the first time an outdoor wi-fi service had been mentioned in North Korean media, and that it runs alongside two cellular networks operating in the country that provide wireless data service.

Another device shown at the exhibition was an “intelligence home system” which recognises human voice to automatically operate electronic instruments such as fans, air conditioners, televisions and lights.

This system was developed by the Kim Il-sung University, which seems to be at the forefront of the country’s high-tech endeavours.

DPRK Today, a propaganda website, reported on 21 November that researchers from the university had developed a number of advanced artificial intelligence systems, including a Korean-language voice recognition programme.

Martyn Williams, who runs the respected North Korea Tech blog, told BBC Monitoring that the services cited in the country’s media “are real and do appear to be in use by people in Pyongyang at least”.

“North Korea does have talented software and system engineers so a lot of the software highlighted in reports is real and written inside the DPRK [Democratic People’s Republic of Korea, North Korea’s official name].”

The driving force behind the technology investments seems to be restructuring of the economy and boosting “national power”.

During a ruling party meeting in April, Kim Jong-un said science and education should “serve as groundwork for state building and an important index of national strength” and put forth a policy that “a revolutionary turn should be made in the work of science and education”, according to the official KCNA news agency.

As part of efforts to nurture a scientific community, North Korea has offered incentives to scientists and engineers in the form of “lavish” apartments and other privileges.

The broader focus on science and technology has begun to appear in North Korean state media and propaganda outlets extensively.

In an unusual move, Rodong Sinmun carried an article on 29 October by Ri Ki-song, a professor at the Institute of Economy at the Academy of Social Sciences, in which he said that the North Korean economy should transition to a high-tech “knowledge-based economy”.

A “special article” in the same paper on 8 December said the North Korean economy is “developing in a more innovative direction than ever before in the past” and will “give priority to localisation and development of science and technology in developing its economy”.

“Well aware that the introduction of high value-added industries would speed up economic development, the North appears to have embarked on its own fourth industrial revolution,” Lim Eul-chul, a professor at South Korea’s Kyungnam University, was quoted as saying by South Korea’s Yonhap news agency on 21 November.

So is North Korea on its way to becoming an innovation powerhouse?

It is not known for its technological advancements – unlike its Southern neighbour – so some degree of scepticism is warranted.

“North Korea does not have much strength in advanced manufacturing, so the phones and computers that are often paraded as domestic are from China,” Mr Williams notes.

In May 2018, Trend Micro, a Japan-based anti-virus company, said that the North Koreans had illegally copied its intellectual property or source code for its SiliVaccine tool.

Last year, the North Korean media used Apple’s trademark “iPad” name to refer to a locally-developed tablet, which was dubbed as the “Ryonghung IPad”.

“From direct copycat products to loose imitations, to the now blatant use of internationally famous trademarked names like the ‘iPad,’ the North Korean tech world is filled with examples of knockoffs of foreign made products,” a report in NK News website noted in 2017.

The limitations on North Korea’s pursuits extend beyond a supposed lack of technological ingenuity.

A report released by Seoul’s Korea Development Bank in 2017 noted that North Korea’s artificial intelligence industry is “expected to hit a wall, due to its strained financial resources, economic situation and international sanctions…”

Even if those tight sanctions were to be lifted, says Mr Williams, “some countries or companies still might want to avoid business with North Korea because it could hurt their image”.

But he believes major investments could be possible from South Korean companies, “with government encouragement”.

In fact, a group of senior North Korean officials visited Pangyo Techno Valley, a technology hub in the South, on 15 November to learn about autonomous cars, 3D printing, artificial intelligence and gaming technology.

Another potential hurdle could be North Korea’s own “paranoia” over the spread of information, which could stifle any innovation.

“The North Korean government’s best hope is a slow opening up that satisfies people’s thirst for information and a better life while retaining control of the country. A tough balancing act indeed,” says Mr Williams.