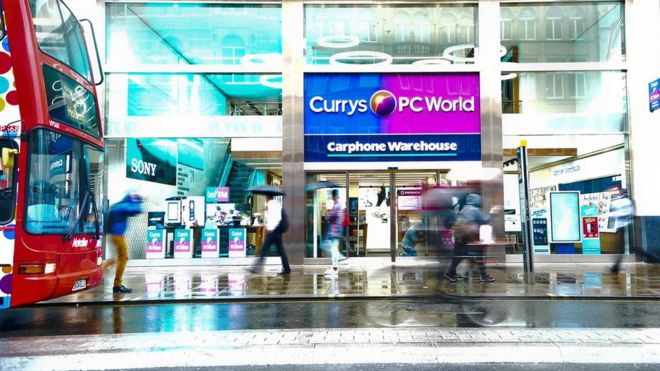 Shares in Dixons Carphone closed 6% lower after the retailer wrote down the value of its mobile business, Carphone Warehouse.

The retailer, which also owns Currys PC World, posted a loss of £440m for the six months to 27 October – down from profit of £54m a year ago.

But it said underlying sales improved.

The company has been struggling with slowing sales of mobile phones and in May announced the closure of 92 of its 700 stores.

It has also issued a string of profit warnings which have prompted the share price to tumble by a quarter this year.

Boss Alex Baldock told BBC Radio 5 Live: “We continue to grow and we continue to gain share from our competition, but part of the transformation that we have to make is the turnaround of Carphone Warehouse, our mobile business.

“There is a lot to do there and that’s reflected in the scale of the write-offs we’ve announced today.”

The company has faced a number of challenges, including falling demand for long-term mobile contracts and people not renewing their handsets as frequently.

It had also seen weaker demand for computers.

In May the company announced that 92 out of 700 stores would close, but today Mr Baldock said there were no plans to shut any more.

He also said the firm planned to increase investment in the business as part of its turnaround.

Richard Hunter, head of markets at Interactive Investor, said it was possible the firm could find new routes to growth but added: “Unfortunately, this statement has laid bare the fact that Dixons Carphone has many plates to spin at a time when competition in the sector is intensifying.

“The strategy to consolidate its competitiveness, which starts from a position of strength given its scale, will take some time to come through, even if successful.”

The company, which employs more than 42,000 people in eight countries, said most of its issues centre on its UK business while international sales remain strong.

Mr Baldock admitted the firm was preparing for a potential no deal Brexit by holding extra stock, but said the firm would be ready for any disruption.

“The environment is not the friendliest, there’s a certain amount of uncertainty and some headwinds facing any business serving the UK consumer at the moment,” he told Radio 4’s Today Programme.

“But a lot of our fate lies in our own hands… We have the strengths, we have the plan, we have the team, we have the investment to get behind our plans for Dixon Carphone and turn it into a lasting success.”

Markets Steady After Solid Run as Focus Turns to ECB