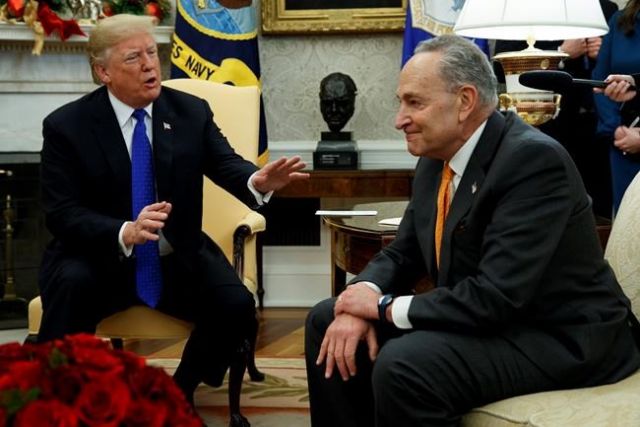 Congressional leaders on Wednesday were digging in for a fight over government funding, a day after a combative White House meeting with President Donald Trump that seemed to raise the likelihood of a partial government shutdown.

Senate Democratic Leader Chuck Schumer said Trump was holding parts of the government “hostage to a petty campaign pledge” to build a border wall with Mexico in order to “fire up” his political base.

Schumer, who met with Trump and House Democratic Leader Nancy Pelosi on Tuesday, said the American people will “suffer needlessly” if Trump follows through on his threat to shut down parts of the government as of Dec. 21 unless $5 billion for the southern border wall is included in a must-pass spending bill.

Trump said on Tuesday he is “proud to shut down the government” in the name of border security, declaring: “I will take the mantle. I will be the one to shut it down.”

On Twitter on Wednesday, Trump said a deadly shooting attack in France shows the need for the border wall.

“Chuck and Nancy must give us the votes to get additional Border Security!” he wrote, referring to Schumer and Pelosi.

But the suspect accused of spraying gunfire at a Christmas market in the city of Strasbourg on Tuesday is a French native, not an immigrant. Police were hunting Wednesday for Cherif Chekatt, born in Strasbourg and well-known to law enforcement.

The funding fight is something leaders of both parties had hoped to avoid as Congress seeks to wrap up its work for the year and adjourn for the holidays. But Trump, who for months had suggested he’d be willing to force a shutdown over wall funding, dashed hopes for a quick resolution on Tuesday, sparring with Pelosi and Schumer during an extraordinary Oval Office meeting that he made sure played out in front of television cameras.

“The president is so used to obsequious advisers who fail to dispel his false and made-up facts that he lives in a cocoon of his own truth,” Schumer said in a Senate speech. He and Pelosi “had to tell him, ‘No, Mr. President that’s not true,’ ” Schumer said. “We had to puncture that cocoon.”

Schumer’s remarks came as House Republicans debate whether to try and pass the wall funding to put pressure on Democrats, but it’s not clear if that plan would succeed.

House Majority Leader Kevin McCarthy, R-Calif., who supports Trump’s $5 billion request for the wall, said House leaders were “working through” what funding level to propose. Asked if the House would vote on the $5 billion request, McCarthy said, “That’s the number I always search for.”

Why did the elk cross road?