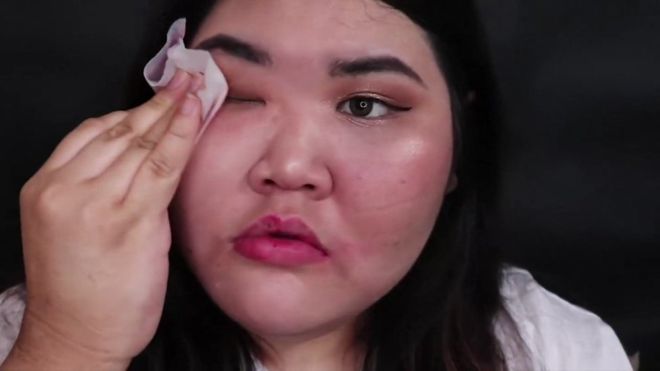 What she didn’t expect were death threats.

The 21-year-old thought hard about her decision. She was worried that it would be duplicitous for someone who usually gives beauty tips to upload a video promoting the idea of going without it.

But her overwhelming thought was that it was time to take a stand.

“I think lot of Korean women are wearing an ‘appearance-corset’,” she told the BBC.

“They have this immense fear of the face they show to others. I heard that women feel especially shameful when they hear that they are ugly. I was like that as well.”

Over five million people have viewed her video as she peels off her fake eyelashes and wipes away her cherry-red lipstick. Thousands offered their support. But others launched personal attacks.

“Certain people said stuff like, ‘you’re not even trying anyway’ and ‘a corset wouldn’t even fit you’. There were even death threats saying that they will come find me and kill me,” she said.

“For a while after I received that death threat, I was afraid of leaving the house.”

‘The best version of myself’

Bae is part of a growing movement of young women in South Korea who are challenging long-held beauty ideals. They call themselves the “escape the corset” movement.

Many shave off their long hair and go without make-up then post the results on social media.

These are acts of rebellion against the constraints they feel society has imposed upon them.

From a young age in South Korea, women are bombarded with adverts telling them they need to be thin with dewy pale skin, a flawless complexion and the perfect oval face.

The beauty industry is one of the world’s largest and generates around $13bn (£10bn) a year in sales. South Korea also has the world’s highest rate of cosmetic surgery per capita.

Success here can often be synonymous with looks. A survey last year found that 88% of job seekers thought looks mattered when it came to finding a job and half of those questioned said they would consider plastic surgery to gain employment.

I met 23-year-old Kim Chu-hui at a professional studio where she was getting her hair and make up done. Like thousands of other graduates she is paying for the perfect photo for her job applications.

“The people who hire me don’t know who I am,” she said. “They have to judge me based on how I look on the photo. So I wanted give them the best version of myself to make a good impression on them.”

The photographer helps her to get it right. “We can fix the shoulder symmetry later. But your facial expression is the most important,” he advises.

These photos will go to boardrooms across Seoul which are still dominated by men who have the power to hire and fire.

Even the smallest change in appearance can prompt the loudest outcry.

South Korean news outlet MBC’s presenter Hyun-ju Yim, has made what in South Korea is a bold decision. She became the first female news anchor to wear her glasses on air after years of struggling with contact lenses and false eyelashes.

She was worried that viewers would think she wasn’t making an effort. Instead she received thousands of emails of support.

“I asked myself, is it really wrong to wear glasses? Surely if it’s a lighting problem then male anchors shouldn’t wear glasses as well. But they do it without thinking. So why haven’t female anchors worn glasses?”

She found herself being more comfortable on air and with herself.

That is why this “escape the corset” movement in South Korea is about more than going without make-up. It is about women in this deeply conservative country finding the freedom to express themselves.

It is rare to see and hear such voices in this once conformist society. However some believe the “escape the corset” women are going a little too far.

At a feminist book café in Seoul, we talked to several women in their twenties who felt they were being pressured to join in.

“Some are saying that “if you wear makeup, you are not a feminist. Even though you might like makeup, you might feel the need to conform,” Chacha told the BBC. “In some cases it feels like the free corset movement is becoming the new corset.”

Another woman, Ms Bang, added that she had agonised over calling herself a feminist because of the movement.

“I like long hair, I like putting up on makeup, I like tight dresses. Could I be a feminist? It is reassuring to hear from my friends that I am a feminist because of my interests in society, my eagerness to promote women’s rights, and my belief in the equality of men and women.”

The “escape the corset” movement has managed to grab headlines and focus attention on women in a patriarchal society who continue to face discrimination at home, in the workplace and on the streets. The gender pay gap remains the highest among OECD countries.

Those who are brave enough to make a stand by altering their appearance have even tougher challenges ahead if they are to make progress on these other gender equality issues across the country.