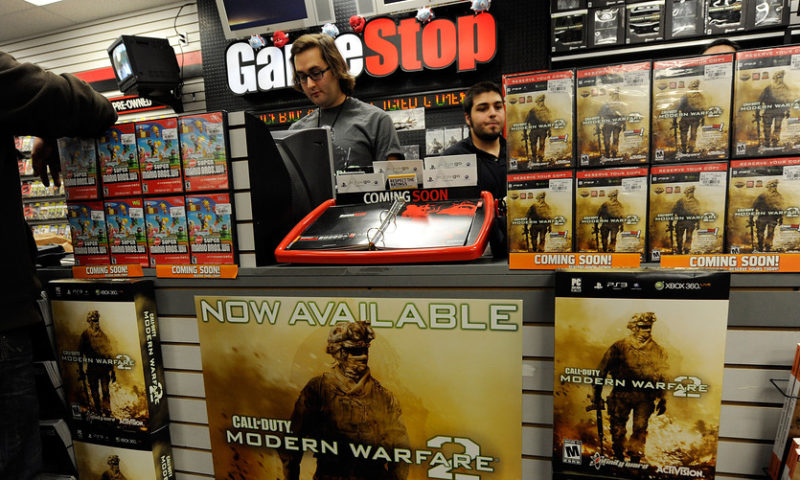 GameStop Corp. is “lost at sea” with a leadership that remains unjustifiably optimistic in the face of declining new and used software sales, a shift toward lower margin hardware sales, continued discounting and a “Hail Mary” effort to sell the rest of the company.

That’s the view of Benchmark analyst Mike Hickey, who said the company’s weak financials are an impediment to attracting a bid, dampening the takeover hopes that have been one of few catalysts for the stock this year. The videogame retailer GME, -6.63% is in the midst of a strategic review as it struggles to sell physical games to customers who can simply download them at home, and has said it is open to a sale of the company.

GameStop “has become irrelevant in the videogame market, as consumers accelerate the migration towards digital purchases, and as games adopt live service models that greatly extend the average play experience and where platform/publishers work towards future subscription/streaming models,” Hickey wrote in a note Friday.

What’s more, the management team “lacks investor credibility” and there are no signs of a turnaround. “We believe GME has zero terminal value, and we see financial performance and valuation suffering over the long term,” said Hickey. The analyst is sticking with his sell rating on the stock and lowered his price target to $9 from $10, or 32% below its current trading level.

GameStop shares were trading down 9% Friday after the company slashed forecasts for the year as it reported third-quarter earnings after market close on Thursday. Hickey’s assessment was harsher than most, but analysts were generally concerned that the company is unable to slow the decline in its core videogame business and fight its way out of its doldrums.

GameStop posted net losses of $488.6 million, or $4.78 a share, after net income of $59.4 million, or 59 cents a share, in the year-earlier period. Adjusted for items such as goodwill and asset impairments due to the company’s sustained stock decline, earnings were 67 cents a share, ahead of the FactSet consensus of 57 cents.

The company’s pre-owned business fell 13.4% in the quarter, partly due to new digital access to older titles. GameStop’s used-game business is a major profit center as sales of physical disks decline.

“We are seeing more of the impact of that in recent months and it does have to do with how customers can get some of those older titles, the very inexpensive titles that you can get through either subscription memberships or online in a pretty heavily discounted mode,” he told analysts on the call, according to a FactSet transcript.

The pace of digital downloads in lieu of physical purchases appears to have sped up in the quarter, said Wedbush analyst Michael Pachter. The company blamed the trend on a weaker-than-expected performance by Activision Blizzard’s ATVI, -5.10% “Call of Duty” and sports titles, but Pachter said it was more likely due to attractively priced offerings from gaming companies such as “season passes” for downloadable products.

“With EPS declining more rapidly than we expected ($3.34 last year and an estimated $2.75 this year) before taking into account the proposed Spring Mobile sale, GameStop clearly deserves to trade at a compressed multiple,” he wrote in a note.

Wedbush cut its price target to $18 from $19, but said it is sticking with an outperform rating because it believes a sale to private equity is imminent. The recent announcement that the company is selling its Spring Mobile business, or Tech Brands, a network of AT&T Wireless stores, for $700 million, “increases the potential for GameStop to ultimately be acquired,” said the analyst.

At Jefferies, analyst Stephanie Wissink agreed that the sale removes a deal hurdle, as reselling and franchise rights agreements come with some tricky change of control provisions.

“Without the Tech Brands, GME is a much more attractive takeout candidate and has greater LBO capacity,” she wrote in a note.

Assuming the $700 million payment is used to reduce debt, it could save the company $48 million in interest payments, which is more than the estimated free cash flow from the tech brand division, she said.

Wissink still sees value in the model if the company can reduce dependence on software and focus on advantages in hardware and peripherals, content and community and collectives. Still, she said, “fundamental push-outs don’t help.”

Jefferies rates the stock a buy and stuck with its $18 price target.

Credit Suisse analysts noted that the company highlighted strong trends over the Black Friday, Cyber Monday holiday weekend. But those were also supported by promotions and discounting, which along with the shift to lower margin categories, will squeeze margins.

“We remain on the sidelines as we balance risks of declining cash flow of the core business with upside risk/ optionality from further strategic alternatives (that process is still ongoing) and very low current valuation,” they wrote in a note.

Bitcoin mining is greener than most large-scale industries: report