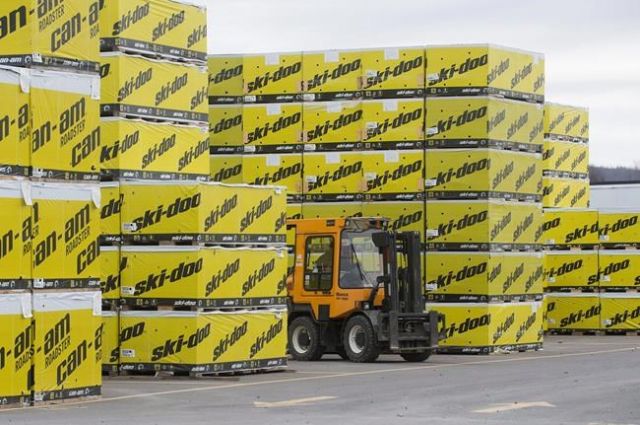 BRP Inc. notched record third-quarter revenues of $1.39 billion, up 14 per cent from last year and slightly above analyst estimates as demand for side-by-side utility vehicles and Sea-Doos fuelled sales growth.

Net income attributable to shareholders of the Quebec-based company, which makes Ski-Doo snowmobiles, recreational watercraft and off-road vehicles, was $90.3 million or 92 cents per share.

That was up from $70 million or 67 cents per share in last year’s third quarter, when revenue was $1.23 billion.

The revenue increase was largely due to higher wholesale of year-round products and a favourable foreign exchange rate variation of $31 million.

BRP’s adjusted earnings were down slightly at $102.9 million or $1.04 per share, but well above the Thomson Reuters Eikon analyst estimate of 98 cents per share.

Chief executive Jose Boisjoli said the company’s Can-Am off-road lineup saw year-over-year sales jump to the mid-20 per cent range in a sector that grew in the single digits. The strong demand helped drive revenues for year-round products to $562 million, a 21 per cent increase in its biggest product category.

BRP shares jumped about six per cent in mid-morning trading on the Toronto Stock Exchange, climbing to $46.77 as the company maintained the upper end of its guidance — already raised twice in 2018.

BRP expects normalized earnings per diluted share for the year to increase 30 to 35 per cent compared with the previous year, up from an earlier prediction for growth of 24 to 30 per cent.

Aluminum fishing boats and pontoons — uncharted waters for BRP — comprise more than half of the U.S. boat market, Boisjoli has said, as the company casts its line for the world’s 700 million anglers.