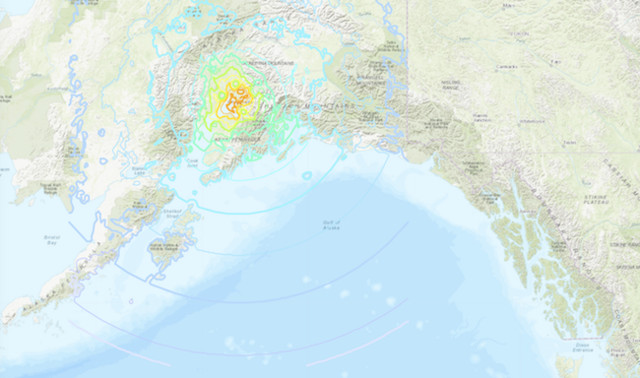 Back-to-back earthquakes measuring 7.0 and 5.8 rocked buildings and shattered roads Friday morning in Anchorage, sending people running into the streets and briefly triggering a warning to residents in Kodiak to flee to higher ground for fear of a tsunami.

The warning was lifted a short time later. There were no immediate reports of any deaths or serious injuries.

Cracks could be seen in a two-story downtown Anchorage building, and photographs posted to social media showed fractured roads and collapsed ceiling tiles at an Anchorage high school. One image showed a car stranded on an island of pavement, surrounded by cavernous cracks where the earthquake split the road.

Cereal boxes and packages of batteries littered the floor of a grocery store, and picture frames and mirrors were knocked from living room walls.

People went back inside after the first earthquake struck, but the 5.8 aftershock about five minutes later sent them running back into the streets.

A 6.6 magnitude earthquake has rocked buildings in Anchorage and caused lamp posts and trees to sway, prompting people to run out of offices and seek shelter under office desks.

An Associated Press reporter working in downtown Anchorage saw cracks in a two-storey building after the quake. It was unclear whether there were injuries.

People went back inside buildings after the earthquake but a smaller aftershock a short time later sent them running back into the streets again.

A tsunami warning has been issued for the Alaska Panhandle. The B.C. coast does not appear under threat.