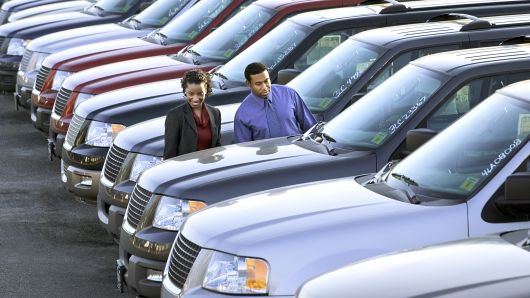 There’s something about that smell, that new car smell, said Jeff Diesing a sales consultant at Chelsea Chevrolet Buick outside of Ann Arbor, Michigan.

To people shopping for a new car, it’s almost like they’re sniffing the turkey as it cooks in the oven on Thanksgiving Day, he said.

“It’s very distinctive and, in general, most people like it,” said Diesing, as he got ready for the action to begin on a Black Friday that was expected to be one of the busiest days of the year for suburban Detroit dealership.

The smell of a new car is, in fact, so popular with some motorists that several companies simulate it with an air freshener spray. “Now you can sustain that same scent and feeling for as long as you own your car,” proclaims the Chemical Guys website.

There are some folks who aren’t quite as enamored of the smell, however, especially in China. Some companies, like Ford, are going to great lengths to eliminate the smell, which is comprised of a combination of chemicals that some say may not be all that healthy to breathe in any way.

Fully 10 percent of buyers in China complained about the odors they found in their new cars, according to the 2018 J.D. Power China Initial Quality Study.

So, Ford, which is struggling to catch up to rivals like General Motors and Volkswagen that dominate the huge Chinese market, has submitted a new method for eliminating the new car smell to the U.S. Patent and Trademark Office. Officially dubbed a “vehicle odor remediation” system, it literally bakes the smell out of a vehicle.

Ford already has an entire department in China charged with sniffing out scents that might offend the sensibilities of Chinese motorists. But it’s not unique. Volkswagen, some years back, created a department charged with figuring out how to create just the right sort of smells that would appeal to its buyers. As the issue with China shows, however, that can be a challenge, as what appeals to the nose in one country can send consumers racing to find fresh air somewhere else.

Complicating matters, that new car smell might be appealing to many buyers, but there’s a growing body of evidence that it isn’t all that good for you.

“Automobiles function as chemical reactors, creating one of the most hazardous environments we spend time in,” said Jeff Gearhart, research director at the Ecology Center.

What you’re actually smelling when you climb into a new vehicle is a combination of odors from things like adhesives and the fabrics in the car’s seats and carpet. In all, your nose might pick up as many as 50 or more volatile organic compounds, or VOCs, and, according to research by the Ecology Center, some other, not very nice, materials, like bromine and antimony — the latter used by some manufacturers as a flame retardant — as well as chromium found in tanned leathers.

A 2001 study by Australia’s Commonwealth Scientific and Industrial Research Organisation, or CSIRO, found anecdotal evidence that the VOCs found in a new car can cause headaches, irritation, even disorientation, but manufacturers have long debated such claims.

That said, some carmakers are have already taken steps to eliminate these compounds, and salesperson Diesing said that he has noticed that many new vehicles don’t have quite as much of that distinct new car smell anymore. One reason is that some automakers have been switching to renewable materials, such as soy, for interior finishes, and they don’t produce those VOCs.

Whether you like or hate the smell of a new car the reality is that it doesn’t last long: studies have shown the chemicals that cause the distinctive scent diminish at a rate of about 20 percent a week. So, unless you order a can of scented air freshener, the odor will be gone not long after you make your second car payment.