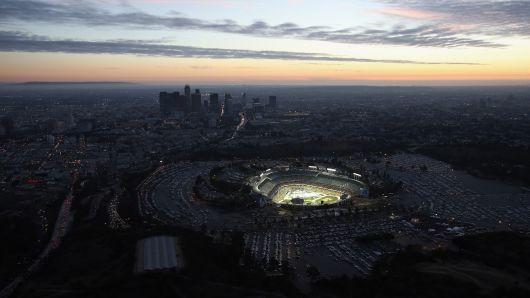 The CEO of Guggenheim Partners and his business associates are pledging more than $20 billion of their personal wealth to backstop insurers associated with the firm should they experience financial troubles, according to a Wall Street Journal report.

The highly unusual arrangement, detailed by The Journal in a published report on Saturday, comes six years after regulators questioned an arrangement under which the insurers contributed money that allowed Mark Walter and a group of co-investors to buy the Los Angeles Dodgers in 2012, for what was a record-breaking $2.15 billion.

What makes the situation even more interesting is that Walter’s associates included Los Angeles Lakers legend Magic Johnson and Guggenheim’s ex-president Todd Boehly, the publication reported. Both men have ownership stakes in the Dodgers.

In what S&P Global Ratings senior analyst Deep Banerjee told The WSJ was “an unusual concept,” the group is using a vehicle called Safe Harbor to provide the funds. The Journal could find no insurance filings referencing Safe Harbor.

However, another investor, Guggenheim outside lawyer Dan K. Webb, said the arrangement makes the Guggenheim-affiliated insurers “likely among the safest” in the country, according to the WSJ. Assets pledged through Safe Harbor include stakes in the Dodgers, another firm that operates one of the biggest Wendy’s hamburger franchises in the country, and shares in Carvana, an online car dealer.

Guggenheim’s Dodger connection came under scrutiny after two annuity holders sued in 2014, saying the firm was using the insurance companies to buy the Dodgers and then hiding the transactions in regulatory filings. The suit was quickly withdrawn, but did attract scrutiny from regulators, who ultimately concluded nothing was amiss.

Walter told the Journal that Safe Harbor’s purpose is to provide security in the event credit markets turn sour. The vehicle makes off-balance-sheet investments in higher yielding instruments that aren’t typical for insurance companies, whose risk-taking is limited generally to investment-grade bonds.

Guggnheim did not immediately respond to a request for additional comment.

Goldman Sachs: The stock market plunge does not indicate a recession on the horizon