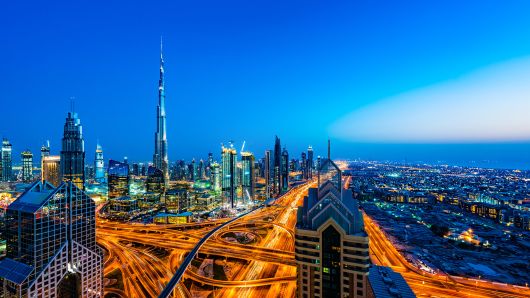 On a stage in front of a few hundred people, nervous entrepreneurs prepare to pitch their business ideas to a panel of five “sharks” — seasoned investors and veterans of Middle East business — in the hope of getting funding.

“I’m looking for something disruptive in the marketplace,” Ganesh Iyer, one of the sharks and a longtime investor in the region, tells the contestants. “An idea which is completely different from what the market already has to offer.”

The United Arab Emirates’ commercial capital of Dubai launched the pilot of “Equity Room” Wednesday, a Middle Eastern version of “Shark Tank,” a show produced by MGM Television in association with Sony Pictures Television. “Shark Tank” lets start-up founders bid for funding from high-net worth sharks and angel investors. The contestants either walk away with a deal, or get eliminated — often after being verbally cut down to size by the judges.

Out of 16 “Equity Room” contestants, just a few managed to score funding in exchange for equity in their venture, landing hundreds of thousands of dollars rather than the few million that some were hoping for.

The field of entrepreneurs spanned a number of nationalities and ages, with the youngest just a year out of graduating from college. Business ideas ranged from the areas of e-commerce and data monetization to artificial intelligence (AI) and gaming.

One contestant, presenting an online platform aggregating shops and inventories that could serve as a commercial search engine for small businesses, was eliminated within the first few minutes of her presentation. Arif Saiyad, shark and CEO of Dubai-based venture capital firm ASA Ventures, told her: “I’ve tried this before, it’s called Google. Your idea isn’t new… I’m out.”

Some others had more success. Aditya Parmar, a 24-year-old raised in the UAE, pitched Zon, an artificial intelligence-driven e-commerce platform seeking to improve 24-hour instant product deliveries and integrating small businesses that lack an online presence.

Initially asking for $2.2 million in exchange for 20 percent equity in his company, he walked away with $500,000 in funding, which he saw as a success.

“I didn’t exactly get what I wanted in terms of valuation, but seeing that there were four sharks on board, I had to take the opportunity because they’re very respected and I know they can get me far,” Parmar told after the show. “So I was willing to trade a lot of valuation for the network and reach that they provide.”

Challenges to entrepreneurship
While the show is an effort to spotlight the UAE’s young and promising entrepreneurs, they still face high barriers compared to some of their counterparts elsewhere in the world, local investors say.

“The entrepreneurial spirit and energy is certainly there with young and old budding entrepreneurs,” Adnan Haider, chief executive of Regal Group AG, the first company in the Middle East to receive a crypto trading license. However, he said, the UAE scene has three primary issues holding it back.

The CEO described these as “limited funding resources, limited visionaries to think about global impact solutions or scaleability of their respective businesses, and general lack of polishing when presenting to the investor community.”

“Some of the business ideas were neat, but were neither able to address key business risks nor financial investment highlights to make it attractive for funders,” he said.

Locally-based investors say there are “only a handful” of venture capital (VC) firms in the area, and that there is so little competition between them that funding offers for start-ups are able to remain fairly low.

Parmar, one of the show’s successful contenders, disputed the lack of money claim, but noted a mindset still firmly anchored to traditional investing.

“Actually there is a lot of money, it’s just that the mindset hasn’t set in yet to go into the VC world,” he said. “Investors are more real estate-focused or more traditional, as opposed to going into VC where the risk is quite a bit higher. So what you need to do is convince investors — who do have the capital, by the way — that your idea is the next best thing.”

Part of this is also due to regional risk, a Dubai-based senior associate of U.K. law firm Taylor Wessing told during the event.

“There is a lot of unrest in the region and people are concerned about what happens if things escalate,” the associate said. “Even the local business community invests outside the region. This isn’t only because of risk diversification, but also because there are more developed markets and they feel more secure within those arrangements.”

Still, one of the most ruthless sharks had high hopes for the future of entrepreneurship in the UAE.

“I think Dubai is probably one of the best ecosystems in the region for new ideas to be tested, due to the demographics here, you have so many people from so many different countries,” said Saiyad, the Portuguese-born ASA founder whose firm has invested more than $100 million in start-ups across five countries since 2003.

“There’s no shortage of start-ups, of ideas, but there is required a change in the mentality of founders in order to be on a show like this,” he added, describing some of the entrepreneurs’ company valuations as “crazy” high.

“But I got wonderful feedback from fellow sharks, they loved it. These start-ups are hungry for cash today. Of course they were nervous, but I think at the end of the day we helped out the right ones, so let’s see what happens next.”