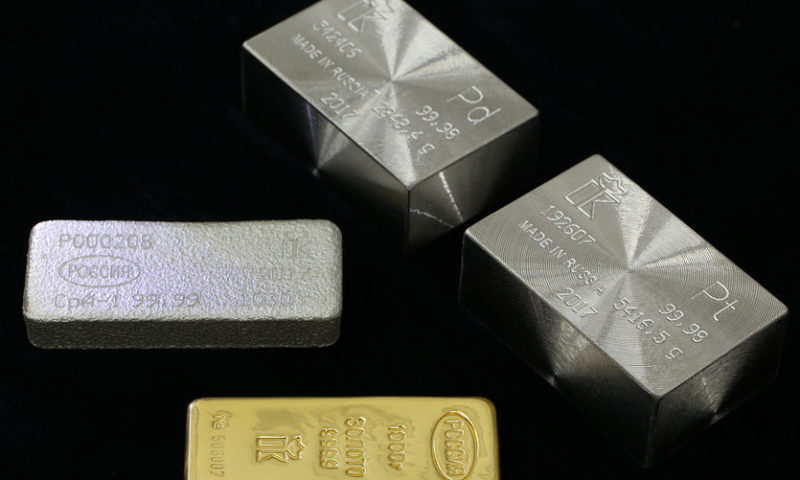 Palladium futures rallied Thursday, notching a third consecutive session climb and their highest settlement on record as growing global demand for the industrial metal continued to highlight the potential for tighter supplies.

Gold prices, meanwhile, ended higher, shaking off pressure from a stronger dollar to hold on to a week-to-date gain as U.S. and European equities declined.

“China needs for palladium is starting to show up,” R. Michael Jones, chief executive officer of Platinum Group Metals Ltd., told MarketWatch Thursday. “We have been predicting this for some time. Look out gold.”

Palladium prices have significantly narrowed their gap with gold prices this year — down to less than $77 an ounce. Earlier this year, gold had traded closer to $500 more than palladium.

“We were so focused on [palladium for the electric vehicle market] — 1% of the car market — we forgot about the metals for 99% of the car market,” said Jones. Palladium is widely used in the pollution-control catalytic converters on gasoline-powered vehicles.

Jones pointed out that “palladium is mostly produced as a by product of platinum or nickel,” so “we don’t expect any supply side response quickly to the increasing demands.”

As for gold, the December contract “appears to have rejected the $1,200 level, as it probed below there on Tuesday and Wednesday but managed to close back above it each of those days,” analysts at Zaner Precious Metals said in a daily note. “The rate-hike theme may have played itself out.”

The ICE U.S. Dollar Index DXY, -0.20% a measure of the U.S. currency against six major rivals, rose 0.3% at 97.06. The dollar strengthened against the pound as Brexit uncertainty boiled up anew as more senior members of U.K. Prime Minister Theresa May’s cabinet resigned, signaling more turmoil and ahead for her leadership and casting fresh doubts on an orderly exit from the European Union.

The dollar index’s push above 97.57 earlier this week was its highest level since June of 2017, according to FactSet data. The gauge has climbed about 5.5% year to date, partly boosted by expectations for further tightening by the Federal Reserve. The Fed is expected to raise rates next month and has signaled three more increases in 2019. Higher interest rates can boost the dollar and dull demand for dollar-denominated commodities.

Gold, however, has shown resilience, trading 0.5% higher so far this week. Declines in benchmark U.S. and European stock indexes week to date have also helped to boost the precious metal’s investment appeal.

“Reports that the U.S. will hold off on automotive import tariffs for now could be seen as a boost to free trade and therefore supportive to the global economy, and this is supportive to commodities in general,” said analysts at Zaner Precious Metals in a daily note.

“There were also reports of central bank buying, and as we have mentioned earlier this week, ETF holdings are at their highest levels since July, which is longer-term bullish, the analysts said.

The most useful donations for victims of the California wildfires