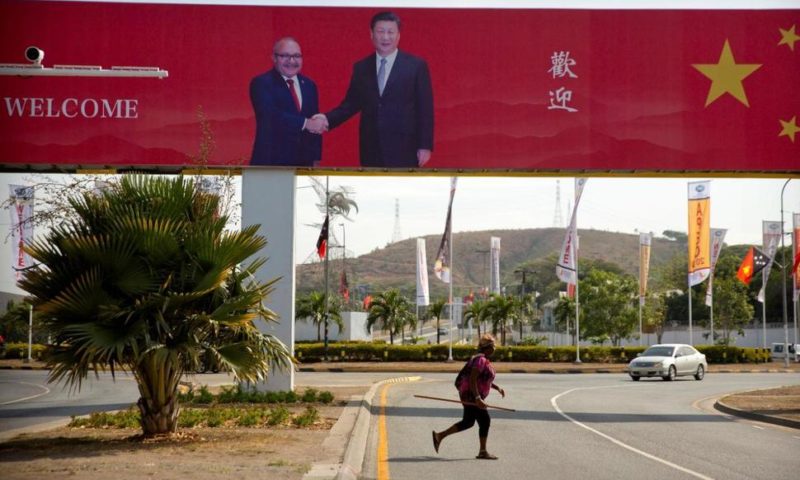 As world leaders arrive in Papua New Guinea for a Pacific Rim summit, the welcome mat is especially big for China’s president.

A huge sign in the capital, Port Moresby, welcomes Xi Jinping, picturing him gazing beneficently beside Papua New Guinea’s leader, and his hotel is decked out with red Chinese lanterns. China’s footprint is everywhere, from a showpiece boulevard and international convention center built with Chinese help to bus stop shelters that announce their origins with “China Aid” plaques.

On the eve of Xi’s arrival for a state visit and the Asia-Pacific Economic Cooperation meeting, newspapers in the country ran a full-page statement from the Chinese leader. It exhorted Pacific island nations to “set sail on a new voyage” of relations with China, which in the space of a generation has transformed from the world’s most populous backwater into a major economic power.

With both actions and words, Xi has a compelling message for the South Pacific’s fragile island states, long both propped up and pushed around by U.S. ally Australia: they now have a choice of benefactors. With the exception of Papua New Guinea, those island nations are not part of APEC, but the leaders of many of them have traveled to Port Moresby and will meet with Xi.

“President Xi Jinping is a good friend of Papua New Guinea,” its prime minister, Peter O’Neill, told reporters. “He has had a lot of engagement with Papua New Guinea and I’ve visited China 12 times in the last seven years.”

Pacific island nations, mostly tiny, remote and poor, rarely figure prominently on the world stage but have for several years been diligently courted by Beijing as part of its global effort to finance infrastructure that advances its economic and diplomatic interests. Papua New Guinea with about 8 million people is by far the most populous, and with its extensive tropical forests and oil and gas reserves is an obvious target for economic exploitation.

Six of the 16 Pacific states still have diplomatic relations with Taiwan, a sizeable bloc within the rapidly dwindling number of nations that recognize the island regarded as a renegade province by Beijing. Chinese aid and loans could flip those six into its camp. A military foothold in the region would be an important geostrategic boost for China, though its purported desire for a base has so far been thwarted.

Beijing’s assistance comes without the oversight and conditions that Western nations and organizations such as the World Bank or International Monetary Fund impose. It is promising $4 billion of finance to build the first national road network in Papua New Guinea, which could be transformative for the mountainous nation. But experts warn there could also be big costs later on: unsustainable debt, white elephant showpieces and social tensions from a growing Chinese diaspora.

“China’s engagement in infrastructure in PNG shouldn’t be discounted. It should be encouraged but it needs to be closely monitored by the PNG government to make sure it’s effective over the long term,” said Jonathan Pryke, a Papua New Guinea expert at the Lowy Institute, a think tank in Sydney.

“The benefits of these projects, because a lot of them are financed by loans, only come from enhanced economic output over a long time to be able to justify paying back these loans,” he said.

“The history of infrastructure investment in PNG shows that too often there is not enough maintenance going on,” Pryke said. “There’s a build, neglect, rebuild paradigm in PNG as opposed to build and maintain which is far more efficient.”

Some high-profile Chinese projects in Papua New Guinea have already run into problems. A promised fish cannery hasn’t materialized after several years and expansion of a port in Lae, the major commercial center, was botched and required significant rectification work. Two of the Chinese state companies working in the country, including the company responsible for the port expansion, were until recently blacklisted from World Bank-financed projects because of fraud or corruption.

Xi’s newspaper column asserted China is the biggest foreign investor in Papua New Guinea, a statement more aspirational than actual. Its involvement is currently dwarfed by the investment of a single company- ExxonMobil’s $19 billion natural gas extraction and processing facility.

Australia, the former colonial power in Papua New Guinea, remains its largest donor of conventional foreign aid. Its assistance, spread across the country and aimed at improving bare bones public services and the capacity of government, is less visible.

But its approach is shifting in response to China’s moves.

In September, the Australian government announced it would pay for what is typically a commercial venture – a high-speed undersea cable linking Australia, Papua New Guinea and the Solomon Islands that promises to make the internet and telecommunications in the two island countries faster, more reliable and less expensive.

Earlier this month, Australia announced more than $2 billion of funding for infrastructure and trade finance aimed at Pacific island nations and also agreed to joint development of a naval base in Papua New Guinea, heading off feared Chinese involvement. It is also boosting its diplomatic presence, opening more embassies to be represented in every Pacific island state.

“The APEC meeting is shaping up to be a faceoff between China and Australia for influence in the Pacific,” said Elaine Pearson, the Australia director of Human Rights Watch.

That might seem a positive development for the region, but Pearson cautioned that competition for Papua New Guinea’s vast natural resources has in the past had little positive impact on the lives of its people.

“Sadly exploitation of resources in PNG has fueled violent conflict, abuse and environmental devastation,” she said.