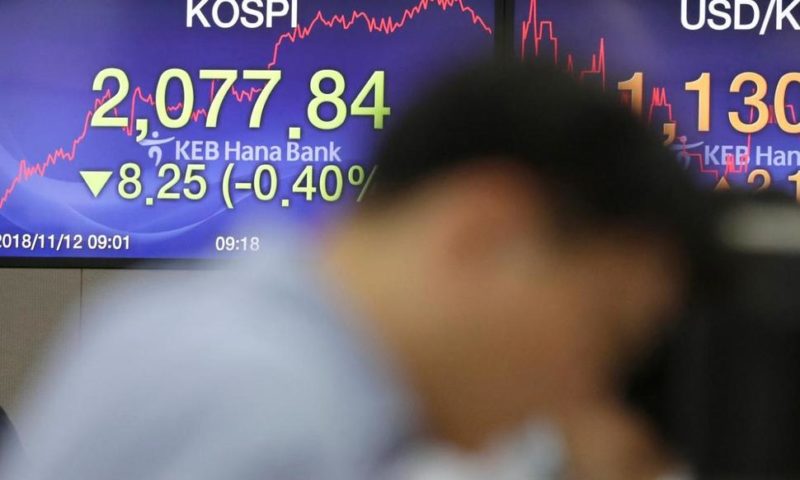 Global markets are subdued as investors look to the release of economic data by the U.S. and China that could show the effects of a trade dispute between the world’s two biggest economies.

SINGAPORE — Global markets were subdued Monday as the price of oil rose and investors looked to the release of economic data by the U.S. and China that could show the effects of a trade dispute between the world’s two biggest economies.

GLOBAL GROWTH: Markets are watching for the release of U.S. inflation data by the Labor Department on Wednesday, which zeros in on consumer prices. A high figure could bolster expectations of rate increases by the Federal Reserve. In Asia, traders are awaiting industrial production data from China and Japan. They will be looking for indications of a recovery in the Chinese economy, where auto sales fell for the fourth straight month in October. Concerns over China’s softening economic growth and its simmering trade dispute with the U.S. have weighed on global stock markets.

ANALYST’S TAKE: “It is a data-centric week this week where U.S. CPI is expected to be the highlight for hints on the Fed and also the wider market, particularly the greenback,” Jingyi Pan of IG said in a market commentary.

ENERGY: Oil futures rose on news that major producers planned to reduce output. Saudi Arabian energy minister Khalid al-Falih said Sunday that the kingdom will reduce exports by around 500,000 barrels a day from November to December. Russian oil minister Alexander Novak said at a meeting of oil producers in Abu Dhabi that his country was open to cuts. Benchmark U.S. crude bounced back from 10 days of losses, adding 34 cents to $60.53 per barrel on the New York Mercantile Exchange. The contract shed 48 cents to $60.19 in the previous session. Brent crude, used to price international oils, picked up 87 cents to $71.05. It fell 47 cents to $70.18 in London.

Corporate Fixed Deposits: All you need to know