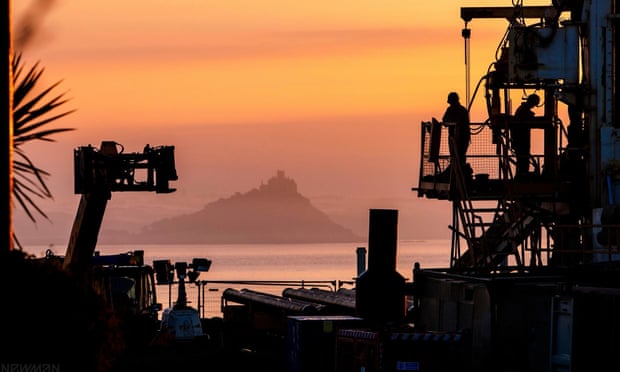 A trailblazing energy project has started drilling the UK’s deepest ever borehole in Cornwall in a bid to use heat from hot rocks as a zero-carbon source of electricity.

The team behind the £18m scheme hopes to create the UK’s first deep geothermal power station and ignite a renewed interest in the technology’s wider potential.

The project near Redruth involves two deep holes being drilled over a course of around six months. Drilling began on Tuesday, with one hole expected to be 1.6 miles (2.5km) deep and the other as far as 2.8 miles (4.5km) down, which would be a UK record for a borehole.

Water will then be pumped into the shallower well, where it should be heated by naturally fractured hot rocks deep underground, hitting temperatures of up to 195C. 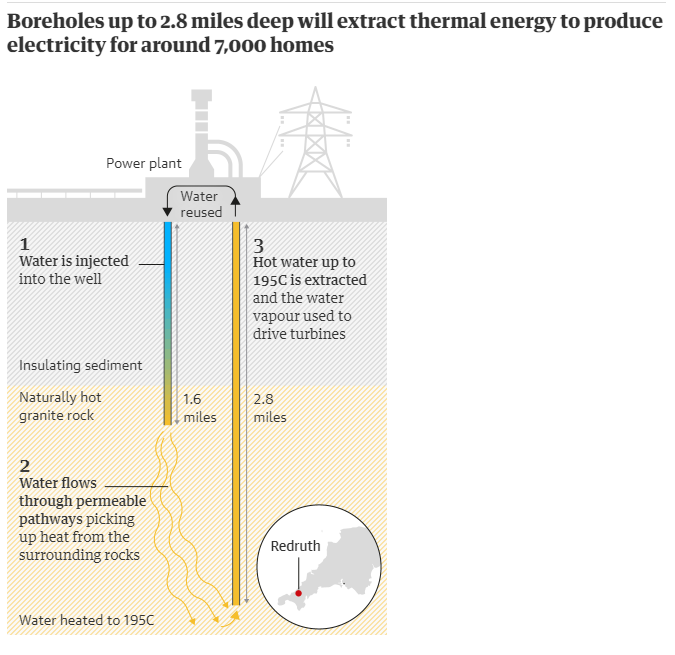 The heated water then comes to the surface via the deeper well, with heat used to produce water vapour that turns a turbine and generates electricity. The water is then injected underground and the cycle starts again.

Ryan Law, managing director of Geothermal Engineering, the company behind the project, said the start of drilling was a “huge” moment for geothermal energy in the UK.

“For the broader industry it is a very important project. Should this project succeed it really will be a kickstart to the geothermal industry in the UK,” he said.

The site is in the heart of former tin mining country, and Cornwall has long been thought to have the most easily accessible geothermal resources in the UK. The demonstration scheme has been 10 years in the making and has taken an unusual approach to financing an energy project. Around £10.6m hails from EU funding, with £2.4m from Cornwall county council and the remaining £5m raised by a crowdfunding drive.

Unlike virtually all other new power stations, it will receive no ongoing subsidies for the electricity it generates.

The project is very much a minnow compared with windfarms fast being built around the British coast. The geothermal power station will have a capacity of 3MW, which is about a third of a single modern offshore wind turbine or enough to power around 7,000 homes. While wind is intermittent, however, the Cornish scheme will be able to generate around the clock.

Tony Batchelor, an expert dubbed “the grandfather of geothermal” for his work four decades ago on unlocking the energy of Cornwall’s hot rocks, said the start of drilling was a key step.

Batchelor, who is advising on the Redruth operation, said: “This whole area is the very best that we’ve got. If it can work here, it will work in not dissimilar areas in Devon and Cornwall and you could start looking elsewhere, depending on how it works.”

In the future, he said the capacity of projects could be 10-12MW each rather than 3MW, and three or four wells could be fitted on a site without making it much bigger. But he cautioned that it would take time for such a programme. “This isn’t going to be quick,” he said.

The project is not the UK’s only geothermal scheme, and Law said the firm has already identified up to five other possible sites. Southampton has a much shallower geothermal well that dates back to the 1980s and provides heat and power for local homes.

Elsewhere in Cornwall, work is underway to use geothermal to heat the Jubilee Pool in Penzance, and the Eden Project is fundraising for a 5-7MW scheme.

Energy experts are split over the commercial prospects of geothermal and whether it could reach scale in the UK.

Peter Atherton, an analyst at energy consultancy Cornwall Insight, said: “It’s like tidal. There is a very large energy source there. But can you get it in a way that is ultimately economic and, secondly, what environmental side-effects does it have?

“If you can tick those two boxes, there is a big resource there. In the south-west there is a decent geothermal geology.”

However, energy expert and author Chris Goodall said: “If this site is successful, hot rocks could provide around 5% of UK electricity and substantial amounts of heat.”

Geothermal projects have generated minor earthquakes in the past, but geologists said the risk would depend on the volumes of water and speed with which it is injected. Law said: “Any relative risk of induced seismicity is very well controlled.”