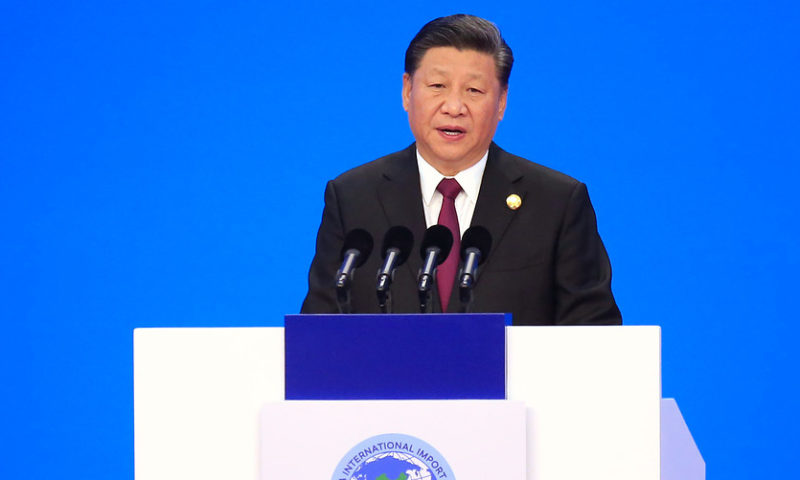 BEIJING — Chinese President Xi Jinping sought to portray China as a willing importer and open market amid trade frictions with the U.S. and other partners.

To underscore its attractiveness as a market, the president highlighted China’s population of 1.3 billion and its size as the world’s No. 2 economy. “The Chinese economy is not a pond but an ocean,” Xi said. “High winds and storms may upset a pond but never an ocean.”

Xi offered few new specifics in his speech but reiterated policies and pledges Beijing has made this year to reduce trade tensions. He said China intends to lower tariffs to make imports more affordable, treat domestic and foreign companies the same and better protect intellectual property rights of businesses by imposing punitive penalties.

The Shanghai import fair has been billed as one of China’s major political events of the year and its promotion to foreign governments and businesses has been designed to project openness at a time when Beijing is engaged in a trade dispute with the Trump administration and facing criticism from foreign businesses and governments for trade and investment practices that are seen as unfair.

Leaders and senior government officials from more than a dozen countries — from Pakistan to Russia — as well as the heads of the International Monetary Fund and World Trade Organization were in attendance for the speech at a trade fair facility in Shanghai.

In other areas, Xi said the Shanghai Stock Exchange SHCOMP, -1.11% will test a registration system for companies that want to list and will set up a new board to help innovative startups raise funds. Currently, regulators approve initial public offerings in a process that companies complain is plodding and unnecessarily cautious.

He also cited the importance to imports of China’s free trade zones in Shanghai and the island of Hainan.