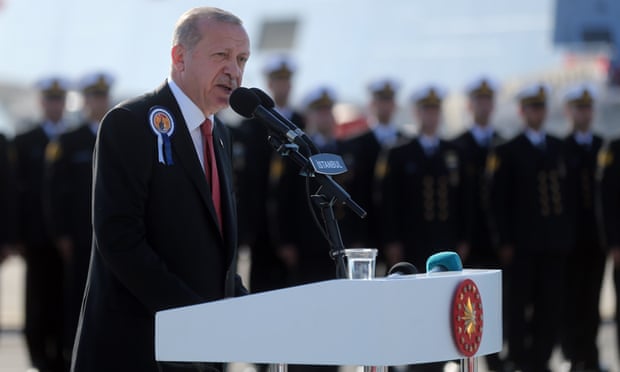 The Turkish president, Recep Tayyip Erdoğan, has warned foreign oil companies against energy exploration near Cyprus, describing those defying Ankara as “bandits of the sea” who would face a similar response as its foes in Syria.

Drilling for hydrocarbon resources off the coast of Cyprus, an EU member, is hugely sensitive. The northern third of the island is occupied by Turkey, which invaded in 1974 in response to a coup aimed at uniting the island with Greece. The breakaway portion was declared to be the Turkish Republic of Northern Cyprus (TRNC), which is recognised only by Ankara. UN-backed efforts to reunify the island have failed.

“As we made the terrorists in Syria pay, we will not leave the scene to the bandits of the sea,” Erdoğan said at the commissioning of a Turkish warship, the TCG Burgazada.

Turkey has in the last two years waged successful military campaigns in Syria against Kurdish militia and Islamic State jihadists, which have brought parts of the country’s north under the control of pro-Ankara forces.

Foreign energy companies such as ExxonMobil, in the US, Italy’s ENI, and France’s Total, have all said they are committed to energy drilling near Cyprus, in defiance of Erdoğan’s earlier warnings.

Analysts have warned that the situation is extremely combustible and that one false move could lead to a large-scale confrontation. In February a drill ship contracted by ENI to explore off the coast of Cyprus abandoned its mission after Turkish warships blocked its path.