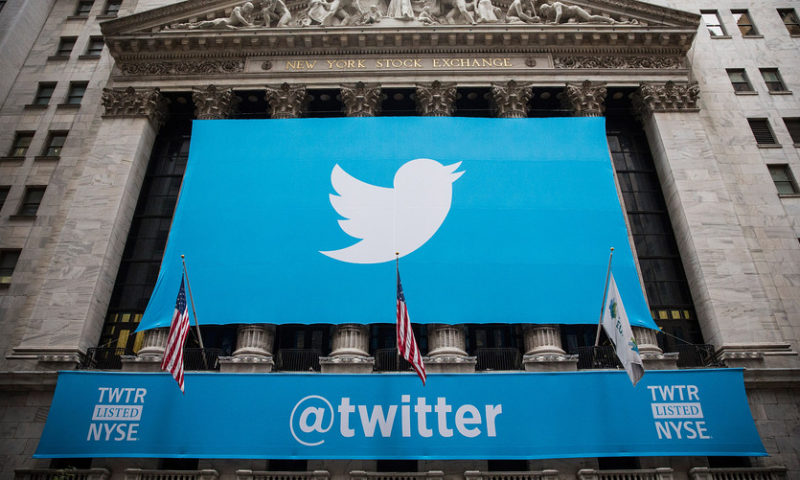 Twitter Inc. stock paid the price three months ago for a declining user count that resulted from the purge of millions of accounts.

Now, investors will see how much that purge will impact revenue and profits.

Twitter TWTR, -4.28% is scheduled to report third-quarter results Thursday before the opening bell, the company will likely discuss further impacts of the company’s efforts to clean up the platform. Twitter calls this its “health initiatives” — company jargon for its attempt to remove hate speech, fake accounts and election meddling by foreign powers.

It’s worth noting that Chief Financial Officer Ned Segal said earlier this year that most of the accounts Twitter removed in its massive 70 million account purge “were not included in our reported metrics as they have not been active on the platform for 30 days or more, or we catch them at sign up and they are never counted.” He vowed in a tweet to say so directly if the company remove 70 million accounts.

Twitter has been successful at increasing its revenue and reporting adjusted profit despite trouble with increasing user numbers. Investors will still be watching the monthly active user count metric closely, as the company does not break out daily active users, a data point that some analysts such as BTIG’s Rich Greenfield say is the most important.

Susquehanna Financial Group analyst Shyam Patil wrote in a note to clients Tuesday that because of the company’s typically conservative guidance, his team is not expecting surprises from the company in terms of quarter-to-quarter declines in user counts. Patil has the equivalent of a hold on the name with a $35 price target.

Twitter executives said in the conference call last quarter that investors should expect a sequential monthly user decline in the mid-single-digit millions. 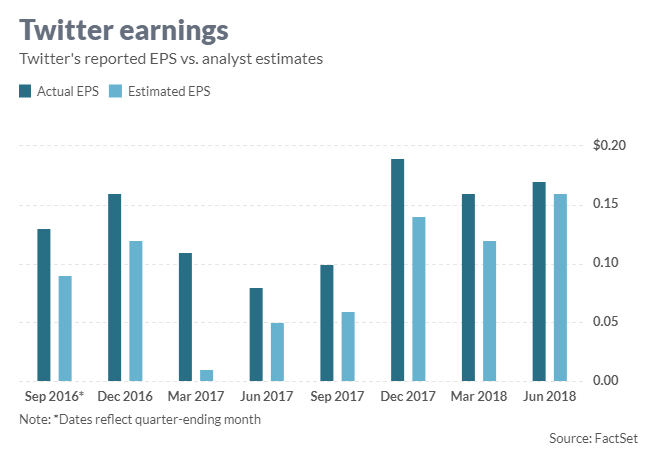 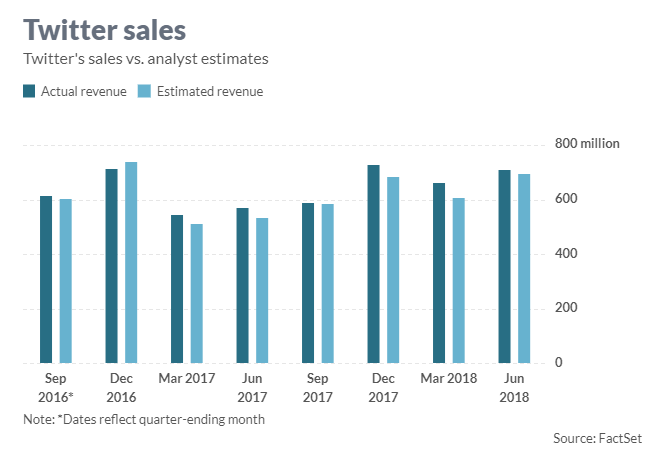 Revenue: Analysts expect sales of $701.1 million, according to FactSet, up from $590 million in the year-earlier period. Estimize contributors project revenue of $708.8 million.

The bulk of the company’s revenue is from ads, which will make up $593.2 million. Data licensing, the business Twitter generates from selling its fire hose of information on the platform, is expected to generate $107.8 million during the quarter. 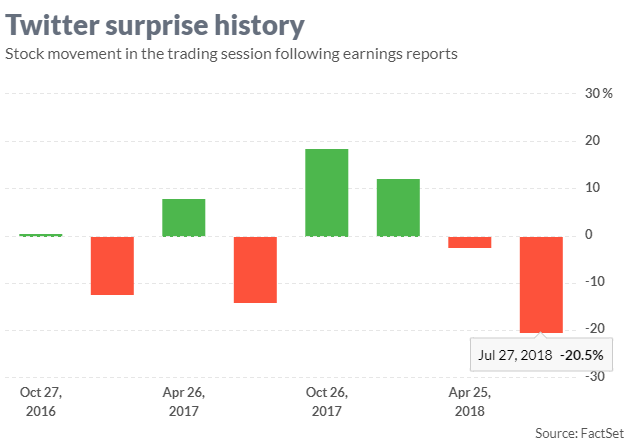 Of the 40 sell-side analysts that cover Twitter, 10 have a buy rating on the stock, 24 rate it a hold and six give it the equivalent of a sell rating, according to FactSet. The average target price is $32.91, which represents an upside of 12.8% from Monday’s close.

What else to watch for: The World Cup will likely contribute to the company’s third-quarter earnings as well. In the second quarter, Twitter said sales from the soccer tournament added $30 million to the top line, well above the $24 million it banked from the 2014 contest. This year the World Cup straddled the second and third quarters, but on the call Segal said the company saw more revenue in the first two weeks than the second, which fell during the third quarter.

Wedbush analyst Michael Pachter wrote in a note to clients Tuesday that the company’s weak guidance coupled with executive comments surrounding user growth in the third quarter keeps him “on the sidelines.” Pachter has the equivalent of a hold on the stock and a $37 price target.

“Twitter appears to have its revenue growth back on track overall, and once it laps the hiccup from purging accounts, we expect the company to emerge in better overall health,” Pachter wrote.

Patil wrote that Twitter’s video ad strategy is doing well, according to his team’s checks, but that the ad tech itself leave room for improvement. Overall Patil is watching executive commentary around live video monetization, the company’s programmatic ads initiative, and the platform cleanup efforts and the effects on users.

How to invest a billion dollars