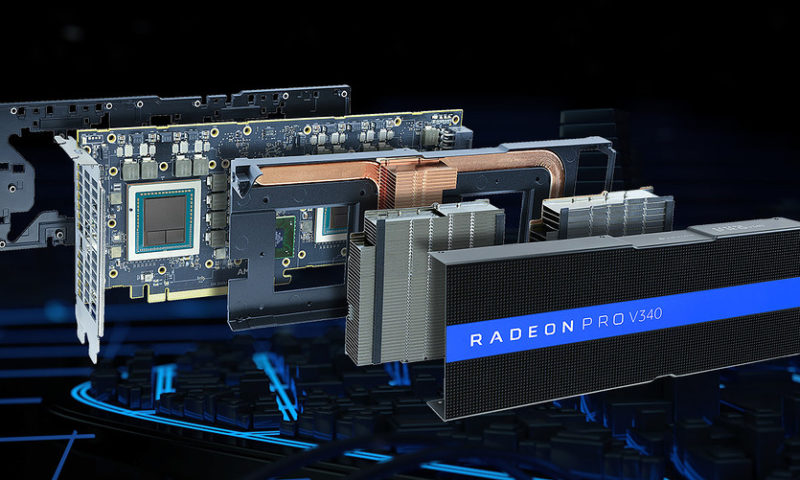 With shares 30% off recent highs, earnings report could help determine if the price is now right

As shares of Advanced Micro Devices Inc. fall back toward earth, investors have the opportunity to decide whether the current trade war climate had impinged upon the chip maker’s ability to capitalize of the misfortunes of its main rival.

AMD AMD, -11.12% is scheduled to report earnings after the market close on Wednesday.

AMD’s stock approached its peak for the year in September following AMD’s launch of its Radeon Pro V340 server card in late August and a slew of price upgrades from analysts, and have since fallen into a correction.

In a recent Morgan Stanley survey of chip distributors, the firm cautioned investors that the chip sector was “by no means out of the woods” as 60% of survey respondents said that recent tariff uncertainty had affected order trends, and that 44% said it had impacted customers orders and inventory behavior.

Tariffs against China in the ongoing trade war could end up hurting U.S. tech companies, and a few companies have already issued warnings and taken precautionary measures.

All during the quarter, however, one of the dominant themes regarding AMD has been how much market share is the company bleeding off an ailing Intel Corp. INTC, -2.16%

“To us, the key question is: does the company trade on near-term Sept/Dec-18 expectations, or do investors continue to look out longer term to 2020/2021 (driven mainly by AMD’s potential market share gains vs. INTC in PCs/servers) as the barometer for valuing AMD?” Deutsche Bank analyst Ross Seymore asked in a note.

Seymore, who has a hold rating and a $23 price target, believes the “goodness” at AMD is already baked into its share price and that bullish sentiments on the stock ignore potential competitive responses from Intel and Nvidia Corp. NVDA, -4.33%

For the quarter, analysts expect $1.05 billion in computing and graphics sales, or a gain of 29% from the year ago period, and a 21% decline in enterprise embedded and semi-custom sales to $653 million.

Stock movement: AMD shares have been on a volatile roller-coaster ride after the company reported its best earnings in seven years in it previous report, rallying to peak at a 12-year high of $34.14 in mid-September, capping an impressive five-month, 200% surge, to then fall more than 30% to current levels.

Cowen analyst Matthew Ramsay, who has an outperform rating and a $33 price target on AMD, said AMD should “partially fill the void” left by Intel 14nm central processing unit, or CPU, shortages during the fourth and first quarter and use 7nm products to capture market share long term into the latter half of 2019 and in 2020.

“7nm” and “10nm” — where “nm” means nanometers — refers to how small a chip maker can make the transistors that go on a computer chip, with the general rule being that smaller transistors are faster and more efficient in using power.

Our industry conversations reveal four primary drivers of OEM frustrations leading to increased receptiveness to alternative SKUs from AMD: 1) capacity shortages during increasingly rare year of PC market strength and Intel’s reluctance to spend capex to materially increase supply; 2) continued pricing and SKU rigidity despite capacity issues; 3) decreased marketing support from Intel to its partners with the unwinding of large portions of the Intel Inside co-marketing program; and 4) the stark reminder to the PC ecosystem of where these customers rank in Intel’s investment priority list (i.e. behind the big 7 cloud titans and behind Apple).

Stifel analyst Kevin Cassidy, who has a buy rating on AMD and a $38 price target, said he expects AMD to use it conference call to report on 7nm graphics processing unit, or GPU, and CPU products, an expansion of gross margins, and the opportunity for increased market share in the PC market.

“We expect AMD to continue to gain market share through 2019 as the chips will be fully qualified while the company will also benefit from the ramp of its second generation chips, the 7nm ‘Rome’,” Cassidy said. “AMD plans to launch its 7nm GPU in 4Q18 that will specifically target the datacenter market which we expect will be followed by a PC model in 2019.”

Wages for the 1% just reached their highest level ever