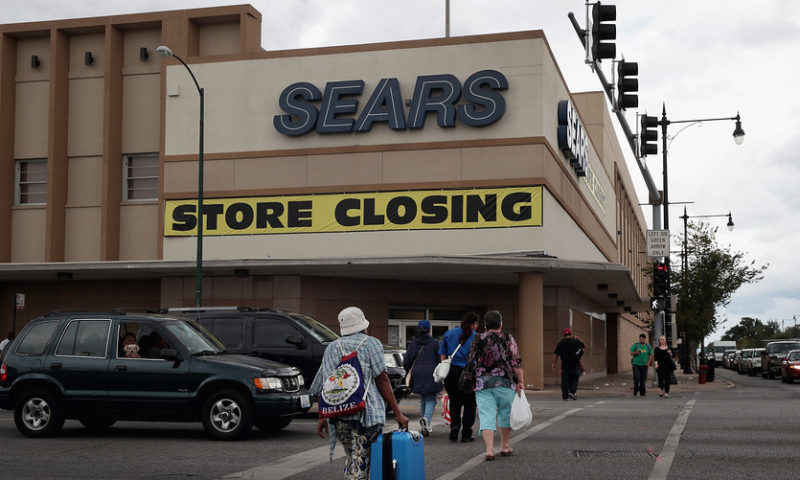 Even if Sears dissolves, Kmart might survive, says one retail expert

If Sears Holdings Corp. files for bankruptcy, which many retail watchers expect it will, the company will be left with a brand that has “no value,” according to Chuck Tatelbaum, director at the law firm Tripp Scott.

After-hours Tuesday, The Wall Street Journal reported that the long-troubled retailer has hired M-III Partners LLC to prepare a bankruptcy filing that could come this week.

A Sears SHLD, -16.83% bankruptcy would be the latest in a long line of filings from the retail sector, including recently Toys ‘R’ Us. However, unlike many previous bankruptcies and restructurings, there was a brand left to rebuild.

Sears is an iconic retailer that was known for tools brands like Craftsman and Kenmore, as well as its mail-order catalog.

“The name is not what it used to be,” Tatelbaum said. “Toys ‘R’ Us, FAO Schwarz and Brookstone have valuable names. Sears has done nothing to preserve its value. The stores are dilapidated. Anyone who’s a good salesperson left a long time ago.

“The brand has no value,” he said.

Sears has seen sales drop for years with little to improve its customer appeal at a time when retail is transitioning to innovative in-store experiences and convenient e-commerce access.

Through it all, the company’s chief executive, main shareholder and key lender through his hedge fund ESL Investments Inc., Eddie Lampert, has sold off key assets in an effort to keep the business afloat.

As recently as late September, Lampert tried to restructure the company with debt payments looming. On Monday, there’s $134 million in debt due.

Almost from the moment Toys ‘R’ Us filed for bankruptcy there was talk of reviving it. Last week, the company called off a bankruptcy auction for its brand name and other intellectual property, proposing a plan for reorganizing.

And in the case of Claire’s, the company was able to continue with fewer stores.

“[Sears] is a different type of proceeding because the entity going in is in such bad shape,” Tatelbaum said. “The creditors have lowered their exposure, that’s why there’s so little inventory.”

Or as Neil Saunders, managing director of GlobalData Retail writes in a note: “The problem in Sears’ case is that it is a poor retailer. Put bluntly, it has failed on every facet of retailing from assortment to service to merchandise to basic shopkeeping standards.”

Saunders raises the possibility of avoiding bankruptcy, but that wouldn’t solve the company’s problems.

“[I]n our view, this is not a long-term solution; it is simply a way to prolong the life of a company that has long since lost the will to live,” he wrote.

Tatelbaum raises another possibility: that Kmart, which became part of Sears in 2005 when it filed for bankruptcy, could survive.

Kmart is “serving a community that doesn’t go to Neiman Marcus or Macy’s,” he said. “It caters to a clientele that needs to be served. The divorce may be good for them.”

These customers have frequented dollar stores like Dollar General Corp. DG, +0.46% But even if Kmart can survive, it will face stiff competition in the space, where retailers are making investments and expanding to draw in and retain customers.

“We see Dollar General as one of the most attractive ‘all weather’ investments in hardline retail as the company can deliver 8% to 9% annual revenue growth while maintaining the defensive characteristics of a consumer staple (85% of total revenue),” wrote Raymond James analysts in an August 30 note.

In the end, however, creditors and others that have dealings with Sears could lose a lot if a bankruptcy happens.

“When bankruptcy occurs, you’re going to have an operations that has virtually no free-and-clear assets to pay employees, vendors, creditors, [etc.],” said Tatelbaum.

Patrick Dinardo, partner at Sullivan & Worcester LLP, points out the impact on malls, which are already hurting from the larger shifts in retail.

Some malls, like one near him in Burlington, Mass., have shrunk the size of its local Sears from two levels to one, lowering their risk.

“But Sears was an anchor across mid-America and I’m not sure all of those malls have options,” he said.

There’s one person who should be fine if a bankruptcy does happen.

“Eddie Lampert is going to be OK,” said Tatelbaum. “Will he lose some money? Sure. But they have, in the process, protected themselves.”

Apple or Android? Here is the most secure phone you can get