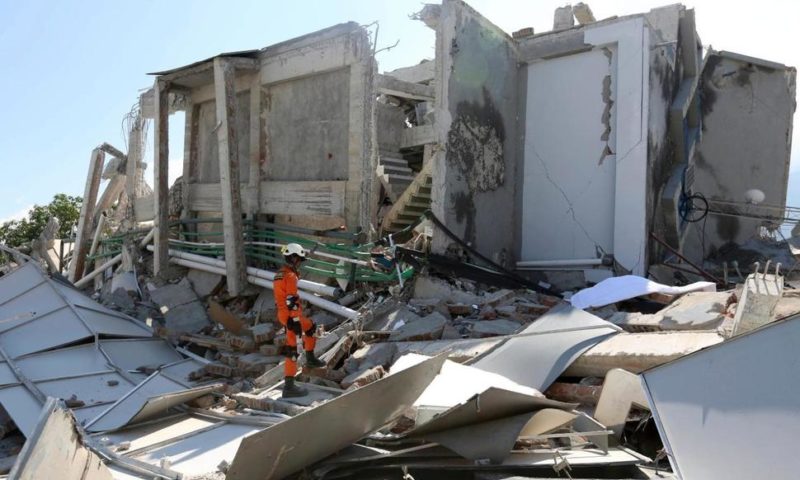 Indonesian President Joko “Jokowi” Widodo says rescue teams are having difficulty recovering victims from the massive earthquake and tsunami because of a shortage of heavy equipment.

PALU, INDONESIA — The Latest on a powerful earthquake and tsunami that hit Indonesia (all times local):

Indonesian President Joko “Jokowi” Widodo says rescue teams are having difficulty recovering victims from the massive earthquake and tsunami because of a shortage of heavy equipment.

He says authorities are deploying more heavy machinery that he hopes will arrive Sunday night so emergency workers can help recover more victims on Monday.

During a visit to the hard-hit city of Palu on Sulawesi island, Jokowi said there are also shortages of fuel, electricity and food, since most shops shut down in the wake of the tragedy.

He said the government is flying in supplies by air, and urged residents of Palu to remain there to help the region recover as soon as possible.

The magnitude 7.5 earthquake created a tsunami that formed a wall of water as high as 6 meters (20 feet) on Friday evening. More than 830 people have been confirmed dead, but officials fear the death toll could climb much higher.

Rescue crews are working to free a 15-year-old girl trapped under concrete in her house after it collapsed on her family during the earthquake that spawned a tsunami on Indonesia’s Sulawesi island.

Unable to move her legs under the heavy concrete rubble, Nurul Istikharah was trapped beside her dead mother and niece in a village in the hard-hit city of Palu. Rescuers struggled Sunday to control water from a leaking pipe, fearing the girl may drown.

Istikharah was unconscious during part of the effort to free her, but rescuers continued to talk to her to try to keep her awake. Others offered her food and water.

The magnitude 7.5 earthquake created a tsunami that formed a wall of water as high as 6 meters (20 feet) on Friday evening. More than 830 people have been confirmed dead, but officials fear the death toll could climb much higher.

Pope Francis has led the faithful in prayer for the people of the Indonesian island of Sulawesi hit by a strong earthquake and tsunami.

The pope offered a prayer after the traditional Sunday blessing for the “unfortunately numerous” dead, the injured and for those who lost their homes and jobs. He said that “God consoles them and supports the efforts of those who are working to bring aid.”

More than 830 people have been confirmed dead in the earthquake and tsunami, but officials fear the death toll could climb much higher. Several large coastal towns remain cut off by damaged roads and downed communication lines.

A village chief says 100 to 200 people could be buried under the debris of a residential complex in the Indonesian city of Palu that was badly damaged in the deadly earthquake that spawned a tsunami and devastated the region.

Rahmansyah, the village chief, says many bodies have already been pulled from the rubble and 90 people are reportedly missing. Access to the area is extremely difficult due to damaged roads, preventing search and rescue teams from reaching the area until Sunday afternoon.

There are about 800 people living in the area, and all of the houses were destroyed by the magnitude 7.5 earthquake that spawned the tsunami.

The quake hit central Sulawesi island on Friday, creating a tsunami that reached as high as 6 meters (20 feet). More than 830 people have been confirmed dead, most of them in Palu.

Indonesian President Joko “Jokowi” Widodo has arrived in the region devastated by a deadly earthquake and tsunami.

Jokowi said Sunday in the hard-hit Sulawesi island city of Palu that the city’s airport “is not 100 percent ready for landing.”

He said, “There are many challenges. We have to do many things soon, but the condition does not allow us to do so.”

Some 821 people died in Palu from the magnitude 7.5 quake and tsunami that struck the area on Friday. Another 11 people are confirmed dead in the regency of Donggala.

Indonesia’s disaster agency says a mass burial will be held in the city of Palu, which was slammed by an earthquake-spawned tsunami that killed at least 832 people.

Sutopo Purwo Nugroho, the spokesman of the national disaster mitigation agency, told a news conference Sunday that the burial will be held for health reasons.

He also said 61 foreigners were in Palu at the time of the disaster, and most have been accounted for. But one South Korean is believed to be trapped in the ruins of the Roa-Roa Hotel, where some 50 others are believed to be trapped under rubble. Three visitors from France and one from Malaysia are missing. The survivors will be evacuated to the Sulawesi island city of Makassar.

A magnitude 7.5 earthquake spawned the deadly tsunami on Friday evening.

Indonesia’s disaster agency says the death toll from an earthquake and tsunami that devastated part of the island of Sulawesi has climbed to 832.

Sutopo Purwo Nugroho, the spokesman of the national disaster mitigation agency, told a news conference Sunday that 821 of those killed were in the hard-hit city of Palu. He said another 11 people were killed in the regency of Donggala.

He says access to Donggala, as well as the regencies of Sigi and Parigi Moutong, is still limited and there are no comprehensive reports from those areas.

He says: “The death is believed to be still increasing since many bodies were still under the wreckage while many have not able to be reached.”

A magnitude 7.5 earthquake spawned the deadly tsunami on Friday evening.

Looters are stealing items from a shopping mall badly damaged by a massive earthquake and tsunami in the hard-hit Indonesian city of Palu in central Sulawesi as search and rescue efforts continue for trapped victims.

An Associated Press photographer saw items being carried off from inside the collapsed mall Sunday. Residents were also seen making their way back to badly damaged homes to try to pick through whatever belongings they could salvage to take away.

A magnitude 7.5 earthquake spawned a deadly tsunami on Friday evening, killing more than 400.

Rescuers are scrambling to try to find trapped victims in collapsed buildings where voices could be heard screaming for help after a massive earthquake that spawned a deadly tsunami in Indonesia two days ago.

The head of Indonesia’s search and rescue agency Muhammad Syaugi told local online media Detik.com that he could hear people calling out from the collapsed eight-story Roa-Roa Hotel in Palu.

He said there could be 50 people trapped inside.

The death stood at 405 on Sunday, but that was expected to rise as rescuers made it to hard-to-reach areas on the island of Sulawesi.

Hundreds of people were injured in Friday’s disaster and hospitals, damaged by the magnitude 7.5 quake, were overwhelmed.