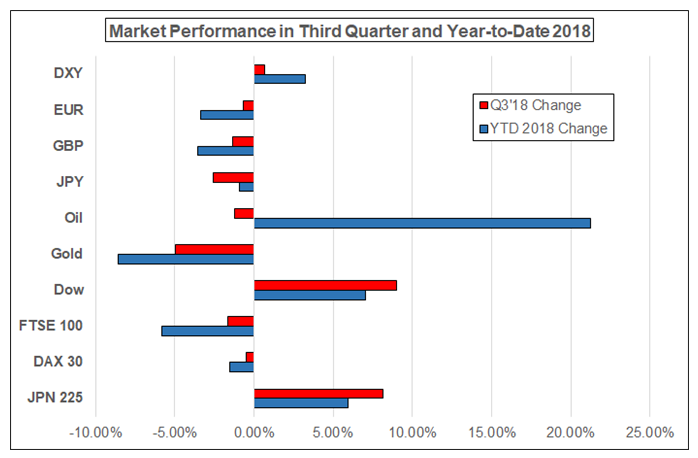 The third quarter is now in the books, and the revival of market volatility and uncertainty around key thematic influences carries over into the fourth quarter of 2018. With fundamental issues around US-led trade wars, Brexit, the Italian government, Turkey, emerging market contagion, among others lingering, the final three months of the year should produce opportunities across asset classes.

See all of the from the Quarterly Forecasts to the Top Trading Opportunities, How to Trade Event Risk, Building Confidence in Trading and so much more.

The US Dollar has proven resilient in the months since US President Trump declared that ‘trade wars are good, and easy to win. It is possible investors ignore this enormous burden until it starts to have its tangible impact on the economy but speculative markets rarely wait.

Insofar as we held a neutral outlook for the Euro in the past quarter, we are slightly more optimistic on the Euro’s potential for the final three months. Trading conditions are expected to remain choppy, but directionally, Euro rates should be biased to the topside.

As we enter the fourth quarter of 2018, the British Pound is picking itself up from its lows comparable to those plunged in summer 2017, and starting to re-coup some of this year’s losses. The overarching driver behind Sterling in the past few months Brexit is very likely to remain through the end of the year.

The Japanese Yen remained under clear pressure against the US Dollar through the third quarter, with USD/JPY hitting highs not seen since mid-January. However, while interest-rate differentials between the two clearly present the Yen at clear disadvantage, there will be much more to its trading as 2018 bows out.

Faith in the Federal Reserve’s commitment to raising rates has thus continued to weigh down gold prices . Barring an economic collapse that forces the Fed to reverse course, gold is likely to continue its downward trend throughout the fourth quarter.

The outlook for global growth has been called into question in recent months as emerging markets bow under external pressures and developed economies engage in trade wars. The outlook for crude demand is concerning and thereby so too is the commodity’s price.

Global share prices accelerated upward in the third quarter, building on the rebound started in the preceding three months. One might conclude perseverance against such odds speaks to hearty underlying strength, making continuation likely. Still, critical vulnerabilities are much too glaring to ignore; the global economy has decelerated in 2018.