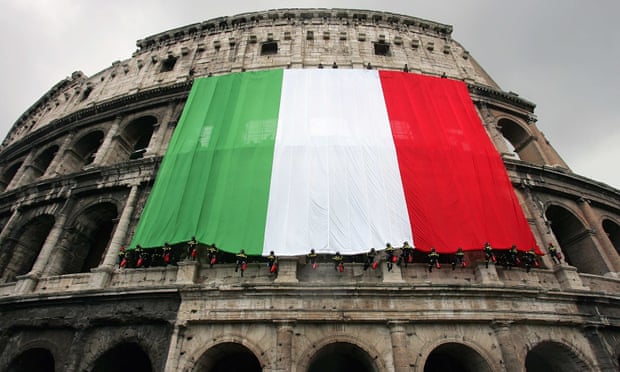 Why all the excitement about the Italian budget?
The financial markets are het up about events in Rome for three reasons. First, Italy is the third biggest economy in the eurozone after Germany and France. Second, its banking system is fragile after two decades in which the economy has posted precious little growth. And third, it has a new populist government – a coalition of the League and the Five Star Movement – with a radical agenda that includes raising pensions and introducing a basic income.

So what is the Italian government proposing?
The government inherited plans that would have resulted in Italy’s budget deficit shrinking in 2019 to 0.8% of the country’s gross domestic product. The deficit is the gap between public spending and the money raised through taxes, and the new administration has said it intends to run deficits of 2.4% of GDP not only in 2019 but in the two years after that. Full details of the budget have yet to be published but Italy’s structural budget deficit – the part that is unaffected by the ups and downs of the economy – is set to widen.

Is there any justification for what the Italians are doing?
Yes. The Italian banking system is seriously burdened with bad debts and that has meant its capacity to lend has been impaired. Low interest rates and the money creation programme known as quantitative easing have had much less of an impact in Italy than elsewhere in the eurozone. If monetary policy – interest rates and QE – is not working, there is an argument for fiscal policy – taxes and spending – to play a bigger role in generating demand. Stronger growth should eventually lead to higher tax revenues and a low deficit.

That seems obvious, so what’s the problem?

The problem is that not everybody sees it that way. The European commission, for example, has an extremely conservative approach to member states running budget deficits and has mandated that these should not go above 3% of GDP. While the Italian budget would be below that, Brussels will not be happy with what it will see as fiscal laxity. The financial markets have also reacted badly to the budget plans, making it more expensive for Rome to service a national debt – all the accumulated borrowing by the state down the years – standing at around 130% of GDP.

Why does this matter?
Italian banks have been big buyers of the bonds sold by the government, and their financial position becomes shakier if those bonds go down in value. The markets are worried about a “doom loop” of weak growth, a rising deficit, losses on bonds and failing banks. They fear, also, that Italy’s problems will spill over into the rest of the eurozone, since banks in other countries – most notably, France – are big holders of Italian debt.

Does this mean a fresh crisis for the eurozone?

Not yet, but all the ingredients are there. The comment by Matteo Salvini, Italy’s deputy prime minister, that jobs and pensions matter more to him than the views of “EU bureaucrats” shows that Rome and Brussels are on a collision course at a time when the eurozone economy is slowing and financial markets are jumpy.