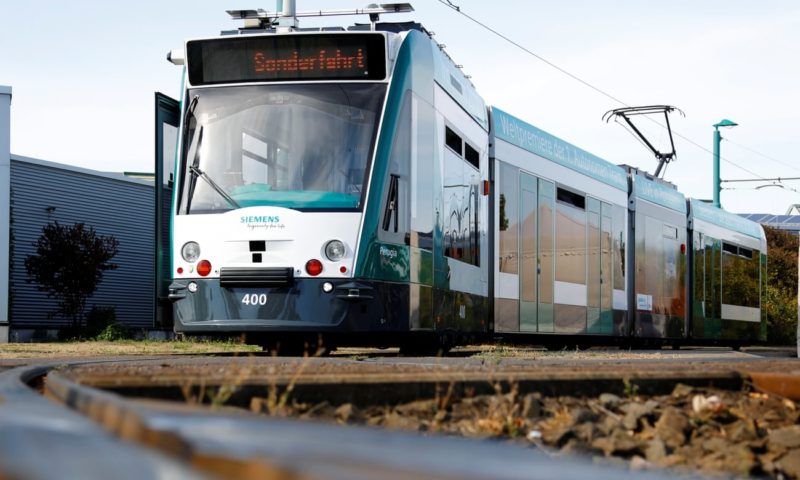 Norbert Gresing shook his head as two teenage boys, deep in conversation and wearing earplugs, stepped out in front of his tram.

“This is the type of situation I face every day,” said the tram driver, who has 25 years of experience under his belt, as he rang his bell. The boys, apparently oblivious to the green and white 10-tonne, 19-metre-long vehicle, appeared as bright green figures surrounded by fuzzy yellow dots on the screen in front of Gresing.

In this case, the boys were not close enough that the tram had to brake, though it did slow down.

But Gresing had little to do with the decision. He was merely sitting in the cab, his hand resting casually on a joystick in case he needed to intervene, while the tram drove itself.

The world’s first autonomous tram was launched in unspectacular style in the city of Potsdam, west of Berlin, on Friday. The Guardian was the first English-language newspaper to be offered a ride on the vehicle developed by a team of 50 computer scientists, engineers, mathematicians, and physicists at the German engineering company Siemens.

Fitted with multiple radar, lidar (light from a laser), and camera sensors, forming digital eyes that film the tram and its surroundings during every journey, the tram reacts to trackside signals and can respond to hazards faster than a human.

Its makers say it is some way from being commercially viable but they do expect it to contribute to the wider field of driverless technology, and have called it an important milestone on the way to autonomous driving.

Travelling in real traffic from the tram depot of Potsdam’s transport company ViP, the articulated Combino model tram whirred its way through a high-rise housing settlement in the south-eastern district of Stern on Friday, contending with bikes, prams and cars which sometimes haphazardly crossed its path during the 3.7-mile (6km) route.

Halfway into the journey on a windy day with leaves swirling over the tracks, an emergency was staged, whereby a Siemens employee pushed a pram onto one of the many unsignalled walkways running across the path of the tram. After its sensors alerted it, the vehicle responded by braking suddenly. Gresing calmly restarted the automated driving system once the woman had pulled the pram safely back onto the pavement.

Along the track, the occasional tram spotter with a notebook and camera captured the historic moment.

Gordian Stark, a visitor to InnoTrans 2018, an international transport exhibition taking place in Berlin, observed the tram in operation from the sidelines, and admitted he had initially been sceptical.

“Truth be told, it does looks rather underwhelming, a normal low-floor tram, but closer up you see all the discreet technology like the sensors, and to see it tackle real-time traffic and to think this is the future, it’s a bit like what it must have been to witness the transition from horse-drawn to steam trams or gas to electric,” he said.

As in many cities in the former communist East Germany, trams have formed the backbone of Potsdam’s public transport system uninterrupted ever since their introduction as horse-drawn vehicles in 1880. Promoted under communism as an efficient public transport method, it has since expanded to cover a route of 18 miles in length.

With the city – currently having a population of 172,000 – expanding fast, it is seen as an essential part of its infrastructure. ViP is proud to boast of the new model that runs on renewable energy (wind and solar) and is able to carry up to 250 passengers as the most environmentally friendly form of public transport.

Gresing, a native Potsdamer who grew up with trams, said at 63, and semi-retired, he was not concerned about his job security, though he admitted that some of his colleagues were.