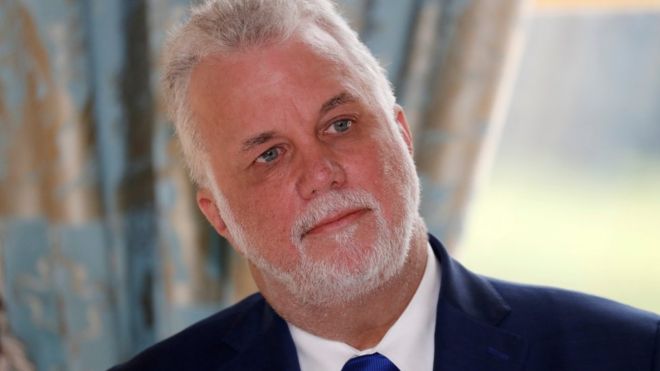 A Canadian political leader has been caught in a dangerous election campaign trap: not knowing the cost of groceries.

Quebec Liberal leader Phillipe Couillard told a radio station this week that a family of three could eat for a week on C$75 ($57; £45).

He conceded it would be challenge and the menu would be limited.

Still, opponents pounced on the comment to accuse him of being out of touch with regular families.

Mr Couillard is fighting to keep his job as the premier of the province in the midst of a challenging election for his party.

The average Canadian family of four spends about $12,000 on food a year. Various estimates suggest families spend anywhere from a low of $140 a week to roughly $230 a week on food.

Manon Massé, a spokesperson for the left-wing Quebec Solidaire party, called Mr Couillard’s comments “an insult to all the families who tightened their belts for his balanced budget”.

Coalition Avenir Quebec posted an image of a stunned-looking Mr Couillard on Twitter, under the tagline “disconnected from reality”.

The Liberal leader has spent two days defending the $75 figure, saying it is not ideal but he knows people who struggle but still manage to live within such a restrictive budget.

Mr Couillard is just the latest politician to fumble an answer over the price of common goods, and to face subsequent accusations that he or she has no real sense of the household budgets of constituents.

In 2013, former UK Prime Minister David Cameron had to defend his ignorance of the price of budget supermarket bread by claiming he prefers to bake home-made loaves.

That revelation came shortly after Boris Johnson, then mayor of London, said it did not matter that he was clueless about the cost of a price of a pint of milk or loaf of bread.

A year later, then UK Labour Party leader Ed Miliband was accused of being a “champagne socialist” when he said in an interview his family of four spent about £70 or £80 on groceries a week – well below the roughly £100 average – and then tried to backtrack and clarify his answer.

US political leaders have also been accused of being out of touch with the cost of living on main street.

In 1992, President George H W Bush was ridiculed after he expressed amazement at a supermarket scanner while attending a grocers’ convention.

But the White House said Mr Bush was merely impressed the machine could read damaged labels.

And former President Barack Obama fumbled when he told a rural Iowa crowd he was shocked by the cost of arugula at upscale supermarket Whole Foods.

Quebecers go to the polls on 1 October.