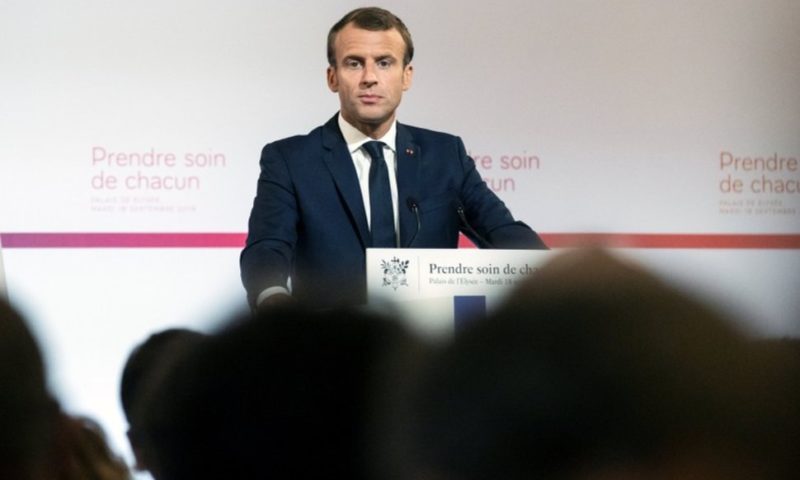 PARIS – President Emmanuel Macron on Tuesday promised extra money and more doctors in rural areas to ease pressure on France’s hospitals, which are creaking under the weight of budget constraints and closures of clinics outside towns and cities.

Macron’s announcement came days after he unveiled a separate 8 billion euro plan to help some 8.8 million people who live below the poverty threshold.

Macron hopes his social reforms will help counter criticism from left wingers that he is a president of the rich and help turnaround a sharp fall in popularity.

Spending on healthcare will increase by 2.5 percent in 2019, higher than the initial 2.3 percent target and amounting to an additional 400 million euros ($470 million) in a near 200 billion euro budget, Macron said.

“Without changes, the hospital system will collapse,” Macron said in a speech at the Elysee Palace. “We need to rethink how we organize healthcare for the next 50 years.”

France’s public healthcare system is considered one of the world’s best, but an ageing population and financial constraints have put it under strain.

Patients increasingly complain of overcrowded emergency rooms and, in rural areas, travel times to the nearest clinic, while nurses frequently bemoan a shortage of beds and staff.

Macron promised the recruitment of 4,000 medical assistants to handle paperwork and free-up doctors in urban areas to treat patients. Some 400 doctors will be deployed to rural zones where coverage is thin. No hospitals would be closed, he said.

Some non-critical emergencies will be diverted to local practices to alleviate pressure on hospital emergency rooms, he added.

Macron said that in time he wanted to overhaul the convoluted financing of hospitals.

Since 2004, hospitals have paid for their costs from the income they receive from the state for treatments. The state regulates how much it will pay public hospitals for each intervention.

Pressure to keep public spending down over the past decade has, however, led some hospitals to carry out unnecessary procedures to generate sufficient revenues to cover their costs.

“This has gotten crazy. Everything in our system encourages it and we lose sight on quality of care,” Macron said.

Samuel Bottaro, a healthcare specialist with private consultancy firm Mazars, said he was encouraged by the proposals but cautioned a number were short on detail.

Funds for the digital modernization of France’s healthcare system will also be available from a 4.9 billion euro envelope set aside for “social cohesion” investments during the 2018-2022 period, the government has previously said.

Rooftop farming: why vertical gardening is blooming in Kampala