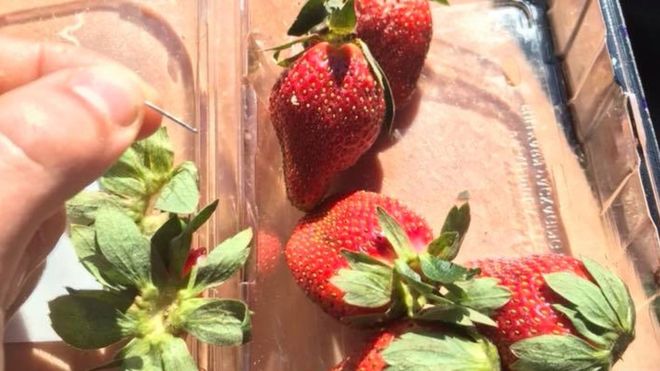 Australia has ordered an investigation into the discovery of sewing needles hidden in strawberries, amid growing alarm over scares across the country.

Contaminated punnets have now been reported in six states and territories. A minister called it a “vicious crime”.

One man was taken to hospital after eating a strawberry that held a needle.

Several brands have been recalled, while New Zealand’s biggest grocers have stopped selling Australian strawberries as a precaution.

“This is a very vicious crime and it’s a general attack on the public,” he said.

Local authorities are also investigating, but no suspects have been identified.

Growers and police have suggested that some cases may be copycat incidents.

“How could any right-minded person want to put a baby or a child or anybody’s health at risk by doing such a dreadful act?” Premier Annastacia Palaszczuk said on Saturday.

On Thursday, the Queensland Strawberry Growers’ Association said the needles may have been placed by a “disgruntled employee”. However, police said that it was too early to speculate.

At least six brands have been caught up in the scare: Berry Obsession, Berry Licious, Love Berry, Donnybrook Berries, Delightful Strawberries and Oasis.

Health officials have advised Australians to cut up strawberries before eating them.

Growers have expressed concerns that the scare, which has come during the peak of production, could have a negative effect on sales for an industry worth about A$130m a year.

On Monday, New Zealand’s two largest food distributors – Countdown and Foodstuffs – said they had stopped importing Australian strawberries due to the scare.