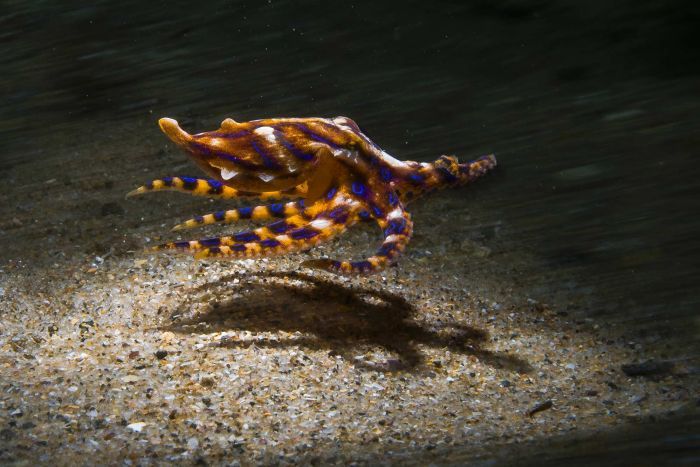 What started as a fascination with capturing photos of the highly venemous blue-ringed octopus has led one man to a world of fascinating miniature marine life living under our noses.

Jumping into the frigid Pacific Ocean for a winter night dive in search of creatures that generally want to hide from you sounds like a tough gig.

However, Stanwell Park photographer Matty Smith is used to suffering for his art, whether it be wrangling a large and uncomfortable camera along with all his dive gear, the chill of stripping off a cold wetsuit in the dark in July, or risking a sting from a shy but deadly creature.

“How it started was I wanted to get a great shot of a blue-ringed octopus, so I asked around where they might be, and a few people suggested Wollongong harbour,” Mr Smith said.

“So I did a night dive there with a mate and we found one straight away.

“As soon as I saw one, how amazing they look, how they flash blue and how well the pictures came out, I was hooked.”

The internationally-renowned ocean photographer, who shot to fame through his over/under photography of bluebottles, has moved onto an octopus with a sting capable of killing 26 adults within minutes.

“The really colourful things are the most poisonous,” Mr Smith said.

“Although they’re deadly, you’d be really unlucky to get a fatal bite.

“They’re really shy and they want to hide more than anything, so you have to be quick before they disappear under a rock.”

Having dived extensively along the south coast of New South Wales where he lives, Mr Smith has developed a good knowledge for the ocean landscape.

And while most of his dives recently have been at night, with the help of an underwater light, he has a high success rate finding the shy octopus.

“When you get your eye in, the more practice you get, the more you spot,” he said.

“They always look like a funny shaped stone so to the untrained eye, you’d probably swim past it, but when you figure out where they like to hide, you can spot them.”

Mr Smith said the blue-ringed octopus looks like a brown gumleaf resting on the ocean floor, but when disturbed, it absorbs water to make itself look bigger and raises its ‘arms’ in defence.

“You normally get two or three photos and then they jet away,” he said.

Discovering a world of tiny creatures

Mr Smith wanted to get a portfolio of shots of blue-ringed octopuses but in doing so, found a world of small and fascinating creatures.

Some of his recent subjects include cuttlefish, prawns, a rose petal bubble snail, pyjama squid, the southern pygmy squid, and tube anemones.

It’s often not until he gets the images home and onto the computer that he notices the intricate details of the creatures he photographs.

“They look beautiful but small, but when you get a sharp picture and you can see the detail, colours, texture and eyes, they look incredible,” Mr Smith said.

He said photographing them at night helped add to the mood and showed off the vibrancy of the colours, but lighting them correctly took time to perfect.

“I like to snoot [direct] the light and focus it into a narrow beam, much like putting a spotlight on an actor on the stage,” he said.

“It’s a specialised and fairly difficult lighting style to pull off, but with practice it works well.”