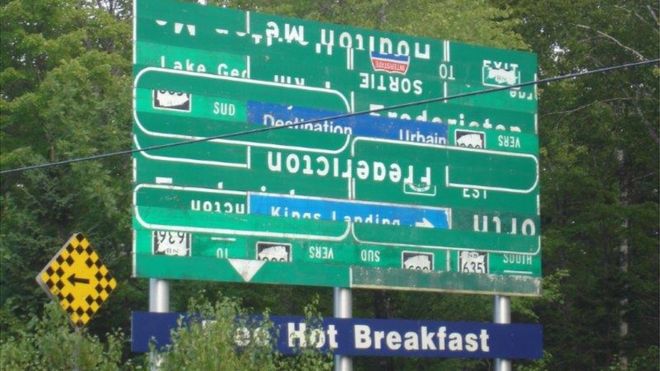 It has to be seen to be believed – but it might still leave a driver scratching his or her head.

A sign along a highway in the Canadian province of Nova Scotia looks like an indecipherable patchwork of various other road signs, mainly because it is.

It has been posted along a provincial highway since late August, when a hotel chain removed its billboard and uncovered the sign beneath.

Locals residents worry it could cause collisions.

Beverly Burlock is a resident of Port Mouton, a small fishing village about 160 km (100 miles) from Halifax, the provincial capital.

She spotted the confusing road sign over the weekend near the highway exit to Port Mouton.

“My first thought was: ‘Oh my God, what will tourists think?'” she told the BBC on Tuesday.

Her second thought was concern that the sign was so incomprehensible that it could cause an accident as drivers slowed to decipher it, especially since it is located on at a “serious” curve on provincial Highway 103.

She took a picture of the sign – a puzzle of French and English route numbers and town names, some upside down – and sent a complaint to the province’s transportation department.

In her complaint, she said “it’s a wonder cars haven’t gone off the road in droves”.

Ms Burlock also sent copies to the office of the provincial premier and her local member of the Legislative Assembly.

The transportation department said in a statement that it had contacted the hotel and the sign will now either be covered or removed by the end of the week “to eliminate any potential confusion to road users”.

In 2009, Highway 103, which runs from Halifax to Yarmouth, was ranked among the most dangerous in Canada. A safety review of the road was launched by the province in 2014.