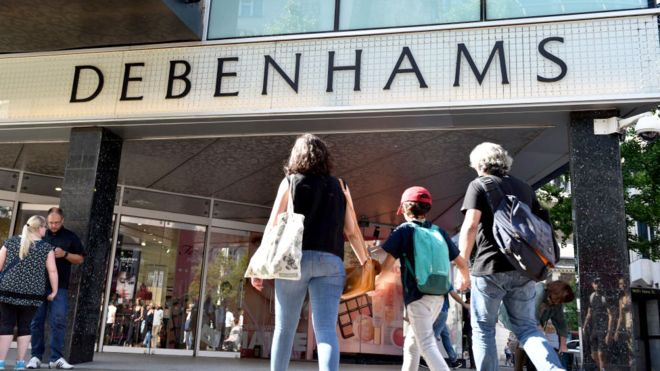 Debenhams has brought in advisers from KPMG to assess a number of options to improve the fortunes of the department store chain.

It is in the midst of a turnaround plan designed to cut costs and boost sales.

Industry insiders say the firm and KPMG are looking at a number of potential options, including a company voluntary arrangement (CVA), but it is just one possible measure under consideration.

Scandinavian sale
A CVA is a form of insolvency proceedings that can be used to close stores and renegotiate rents.

“Like all companies, Debenhams frequently works with different advisers on various projects in the normal course of business,” the department store said in a statement.

It has issued three profit warnings this year, and has lost two-thirds of its share price value since January.

As part of its cost cutting, Debenhams said in August that 80 to 90 jobs at its headquarters would be shed. That followed a February announcement it was planning to cut 320 store management jobs.

The business is also looking at raising cash by selling off its Scandinavian department store chain Magasin du Nord for as much as £200m.

It is a troubled time for traditional retailers, with House of Fraser entering administration and Marks and Spencer saying that it would close 100 shops.

‘Pincer movement’
Richard Lim, of Retail Economics, told the BBC: “The fact KPMG have been brought in does not surprise me. Debenhams will be wanting to look at all the options open to them.

“The harsh reality is that they are operating in one of the most challenging parts of retailing at the moment.

“Consumers are increasingly shopping online, and they are also spending more on things like holidays and the experience economy.

“The other part of the pincer movement Debenhams is facing, is that they are being squeezed on costs, with things like increasing rents and business rates, and rising wage and utilities bills.

“It all means that department stores are incredibly expensive to operate.”

Online drive
However, given the fact that very few of its 170 stores are actually loss-making, Debenhams will want to look at all its options before making any decisions about reducing the size of its estate.

Mr Lim points out: “If you close stores you are in effect giving market share to your rivals.

“So this is something retailers are very reluctant to do – even if profits are on a downwards spiral – unless there are no other options.”

Chief executive Sergio Bucher, who joined Debenhams in 2016, aims to put more emphasis on food and beauty and improve the firm’s online platform.

Sports Direct boss Mike Ashley, who bought House of Fraser out of administration and who owns just under 30% of Debenhams, is believed to be watching the latest developments closely.