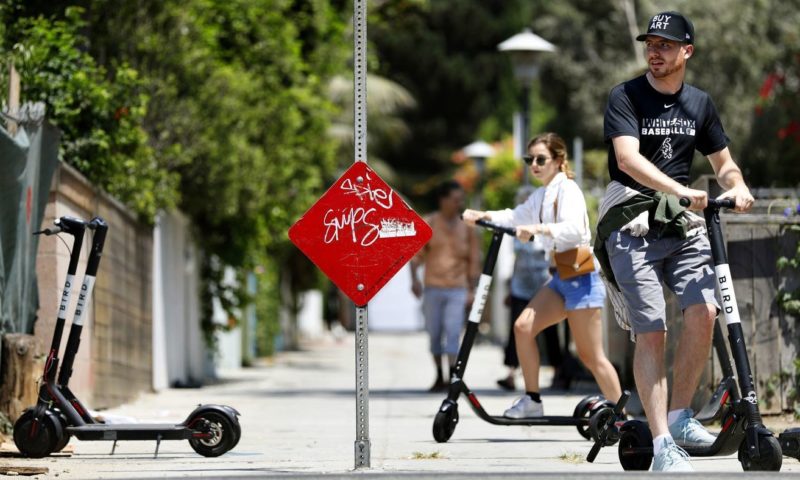 The Los Angeles City Council on Tuesday unanimously approved the city’s first set of rules for the companies that have deposited thousands of electric scooters on sidewalks in neighborhoods from the Westside to Koreatown.

The council created a one-year program to allow any company to apply for a permit to deploy up to 10,500 scooters. The temporary rules will give transportation officials time to tinker with the policies before lawmakers approve a permanent plan, they said.

Tuesday’s vote follows months of debate over how Los Angeles should address the Bird and Lime scooters that began popping up on city sidewalks nearly a year ago.

The zippy vehicles have created a new, fun way for people to travel through the city, but have prompted complaints about haphazard parking, careless riders on crowded sidewalks and users who don’t wear helmets.

“Some folks see the dawn of scooters as a great opportunity,” said Westside Councilman Mike Bonin. “There are some who consider them to be a tremendous nuisance, blocking our sidewalks, and causing problems for seniors, children and people with disabilities.”

He added: “I happen to agree that both perspectives are true.”

The pilot program will also open L.A.’s streets and sidewalks to bicycles that can be rented for short-term rides and returned anywhere, rather than at a kiosk or a dock. The systems, called dockless bikes, are already in use on a small scale at Cal State Northridge and in San Pedro and Wilmington.

The pilot program approved Tuesday imposes a 15-mph speed limit on scooters. It also requires that users leave bicycles and scooters parked upright, on the outer edge of the sidewalk, near bus benches, parking meters and advertising kiosks.

From 7 a.m. to 10 p.m., the companies will have two hours to remove any vehicle that blocks the public right of way, or risk losing their permits, city officials said. The companies will be required to pay $28.32 an hour if any city employees must move a scooter or a bike.

A permit to operate in Los Angeles will cost $20,000 annually, and licensing each vehicle will cost $130 a year, or $39 a year in low-income areas.

In Los Angeles, companies will be required to provide real-time information on the location of their vehicles, aimed at helping officials enforce new regulations on fleet size and parking locations, said Seleta Reynolds, the Transportation Department’s general manager.

The rules are also designed to make scooters and bicycles more widely available to people who are poor, disabled or don’t speak English.

The companies will be limited to 3,000 scooters or bikes anywhere in the city, but can deploy up to 2,500 more in low-income areas, and an additional 5,000 vehicles in low-income neighborhoods of the San Fernando Valley.

Bird and Lime scooters cost $1 to rent and 15 cents per minute to ride. Dockless bike companies typically charge a flat fee for a half-hour ride. Both typically require a credit card and a smartphone to get started.

L.A. will require both types of companies to provide a smartphone app available in multiple languages, and a way for users to rent a vehicle with cash and without a phone.

The city will require bicycle companies to include batteries on half their bikes, to assist older and less physically fit riders, or to make 1% of their fleet handicap accessible.

The Transportation Department will be able to start the permit application process almost immediately, but the approval process could take up to 120 days, officials said.

In the intervening four months, Bird and Lime will be allowed to deploy up to 3,000 vehicles in most areas of the city.

The 3,000-vehicle cap does not apply to Joe Buscaino’s council district, which includes Watts, Wilmington and Harbor Gateway; or David Ryu’s, which stretches from Sherman Oaks to the Miracle Mile.

At a news conference on the City Hall steps before Tuesday’s vote, Buscaino said his commute from San Pedro — riding his bike to the bus, taking the bus to the Metro Blue Line and riding the train to downtown — took 2½ hours.

“If we’re going to address the traffic issue in our city, we need to address traffic solutions,” said Buscaino, who arrived at the news conference on a Bird scooter. (The motorized devices are not widely available in downtown.)

“This is all about choice,” Estrada said. He added that, to put the cap “in perspective, there are about 2 million cars on the road in Los Angeles.”

Scooter riders went to City Hall on Tuesday to support the pilot program, including Jonathon Burlew, 27, of Koreatown, who said Bird sent him an email about the City Council meeting.

Burlew said the scooters had enlarged “the borders of my neighborhood,” helping him easily reach Hollywood, Echo Park, Fairfax and Exposition Park without driving.

“It has made the city a much bigger, livable place for me,” he said.

Since July, Mayor Eric Garcetti and members of the City Council have received more than 2,300 messages of support for Bird, many with the subject line, “I LOVE Bird!”

The messages encouraged lawmakers to “embrace innovation that makes our city greener and our streets less crowded with bumper-to-bumper car traffic.”

Jason Frankovitz, 47, of West Adams, told the City Council that the scooters were replacing walking, rather than car trips. He urged the city to invest in Metro’s bike-share program, rather than partnering with a private company.

“I’m sure people can be found who are taking it to work, or going to the grocery store, but it has to be a statistically insignificant number,” Frankovitz said in an interview. “There’s no trip I would take on a scooter that I would have taken in my car.”

California law prohibits riding electric scooters on the sidewalk. Users can ride in the street if the posted speed limit is 25 mph or slower, as close to the right-hand curb as possible, the law says. Scooter riders can also use bicycle lanes.

The city will also require the scooter companies to print a message on the platform of the scooter that reads, “No riding on sidewalks” in lettering about two-thirds of an inch high.

“We cannot regulate stupidity,” Buscaino said at the meeting. “Wear your helmet. Abide by the speed limit. Don’t ride on the sidewalk.”