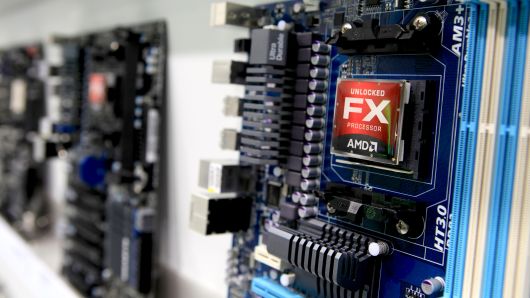 Jefferies raised its price target to $30 from $22 for AMD shares, citing the chipmaker’s technological advantage over Intel. The firm also reiterated its buy rating on the company.

Analyst Mark Lipacis said in a note to clients on Monday that he sees the possibility that by the second half of next year, AMD will have a chip with higher transistor density than Intel for the first time in recent history. “We see this as a foundational shift in competitive dynamics. Meanwhile, our checks also suggest that AMD continues to take share in high-end notebooks,” he wrote.

The chipmaker’s stock is significantly outperforming the market this year. Its shares are up 144.8 percent year to date through Friday versus the S&P 500’s 8.5 percent gain. AMD is the top-performing stock in the S&P 500 this year.

AMD is seen beating Intel to market with a more advanced chip. Intel has said that its 10 nanometer chips will be released for holiday 2019, delayed from a plan to roll them out earlier. But AMD is expected to have its 7 nanometer next-generation server chips next year.

As a result, Lipacis raised his 2019 AMD server chip market share estimate to 12 percent from 8 percent.

In a similar move, Cowen boosted its price target to $30 from $25 for AMD shares Monday, reaffirming its outperform rating on the chipmaker, also citing the rollout of the faster chip. “Intel’s delayed 10nm roadmap — originally targeted for 2016 launch in client and now pushed to 2H19 — opens opportunities for AMD across the business,” analyst Matthew D. Ramsay said in the report.

Zara owner Inditex to sell all its brands online by 2020