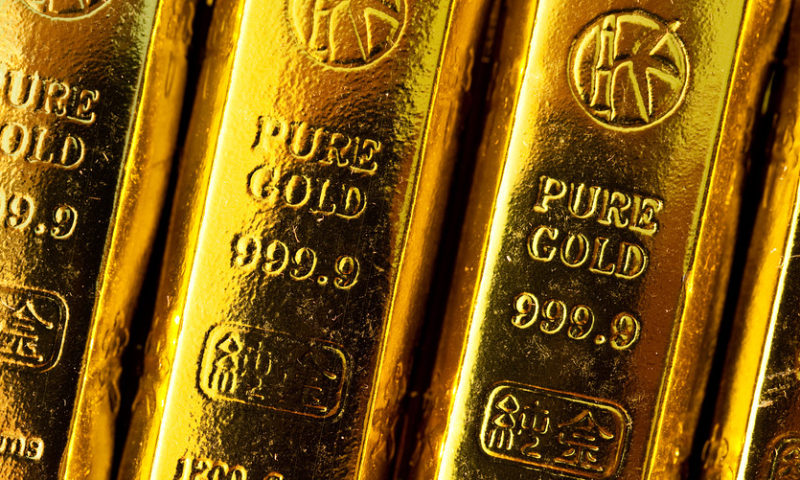 Gold fell Wednesday, pressured after a small upward revision to second-quarter U.S. gross domestic product data, as a leading dollar index stabilized near a one-month low, helping to send prices for the metal down a second straight session.

Moves in the greenback came as investors digested an upward revision to second-quarter GDP, running at a 4.2% clip. Data on July pending home sales, meanwhile, showed a decline of 0.7% in July. The sector has recently logged a number of weak data points, including an existing-home sales drop to a 2 1/2-year low.

“Gold is facing headwinds on higher Q2 GDP reading of 4.2%, up slightly in the first revision along with news of U.S.-Canada resuming trade negotiations, which is impacting equity markets positively [and] tempering any interest in safe haven assets,” said Jeff Wright, executive vice president of GoldMining Inc.

“One longer term positive take away is if/when [the] U.S. and Canada can come to agreement. This should temper the U.S. dollar rally YTD, which has been a major impediment for gold in 2018,” he said.

Gold often trades higher when the dollar weakens, and vice versa, because the precious metal is most actively traded in the greenback. The dollar has been the primary driver for gold action in 2018, with the precious metal down about 8% this year through August. With the dollar now churning over recent sessions, however, gold had largely stabilized above $1,200 since grazing a 1 ½-year low in the middle of August.

“The bull run for gold has been very short-lived. One of the reasons that we have seen weakness in the gold price is because the U.S. economy is standing on robust ground and consumers are feeling confident about this as was evident in yesterday’s economic data,” said Naeem Aslam, chief market analyst with Think Markets.

“The most vital factor in play is the [Federal Reserve] rate-hike cycle. The rate hikes are pushing the dollar higher and for investors dollar is the more favorite instrument,” he said.

The Fed is expected to nudge its benchmark interest rate higher next month and again in December, plus follow up with additional moderate rate tightening in 2019, though the panel has recently noted bubbling concern for a trade-impacted economic slowing.

Labor Day: Which markets are closed?