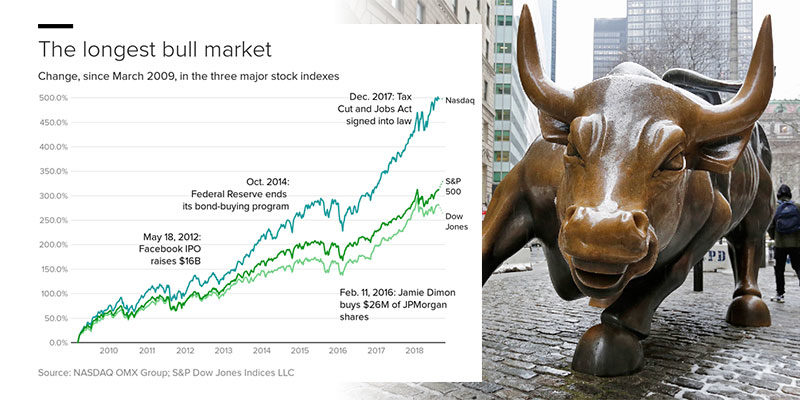 The dilemma of what stocks to buy is particularly tricky right now.

If you want to own shares of companies, you’ll be getting into a market that began rising more than nine years ago and now sits near an all-time high. The bull market, now 3,453 days old, will be the longest in history by the end of trading on Wednesday. And the Standard & Poor’s 500, the broadest measure of U.S. stocks, hit a record Tuesday for the first time in six months.

So is it too late to jump in and pick up some stocks?

Pinpointing market tops is difficult. While Wall Street skeptics have been warning of a big drop for years, this bull keeps proving them wrong, and has risen almost 325 percent since March 2009.

“That would be a mistake,” says Cliff Hodge, director of investments at Cornerstone Wealth Group in Charlotte, North Carolina.

Bailing out now, no matter how long and how high the stock market has climbed, may be just as risky as staying in. Stocks could continue to power higher as investors react to the economy’s fastest growth in four years and corporate America’s best stretch of profitability since 2010.

There are enough risks, such as a full-fledged trade war with China breaking out or interest rates spiking higher than anticipated, to remind investors that going all-in this late in a bull run is not prudent, either.

“The ninth year of a bull market is not the time to plan for onward and upward,” says Rob Arnott, founder and chairman of Research Affiliates, a money management firm in Chicago.

Investors need to strike a balance. They should spread their risk around, buy stocks that offer better value than recent high fliers such as popular but pricey Netflix and look for opportunities of good reward with lower risk.

Here are some stocks and other investment approaches to consider:

JPMORGAN CHASE (JPM)
Buy out-of-favor “value” stocks: The bull run has been driven largely by growth stocks such as video-streaming site Netflix and online retail giant Amazon, causing many forgotten stocks to become more attractively valued. These “value” stocks include large banks, such as JPMorgan Chase, the nation’s largest bank by assets run by Jamie Dimon, one of Wall Street’s most respected CEOs. Other examples of value stocks include energy companies such as Exxon-Mobil and household names that sell everyday consumer goods such as Colgate-Palmolive, Procter & Gamble and Coca-Cola.

ROKU (ROKU)
Buy next-generation tech stock stars: Big profits will be made by finding the next Facebook, Apple or Netflix, says Kevin Landis, president and chairman of Firsthand Funds. Think Roku, the upstart streaming platform for TV and “pure play on cord-cutting,” the tech fund manager says, rather than Netflix, the more established company that has gained roughly 5,660 percent in the bull run. It now trades at a sky-high price-to-earnings ratio. Another upstart Landis likes is Chegg, a leader in the education technology space.

BLACKSTONE (BX)
Buy stocks that aren’t owned by index funds: The bulk of investor cash in recent years has flowed into index funds or exchange traded funds that track stock indexes such as the S&P 500. Last year, $692 billion moved to these “passive” funds, with “actively managed” funds run by portfolio managers suffering outflows of about $7 billion, according to fund tracker Morningstar. That torrent of cash has caused the index to experience distortions such as expensive prices, says Charlie Bobrinskoy, head of investments at Ariel Investments, a Chicago fund firm specializing in value investing. That’s why Bobrinskoy advises investors to consider buying stocks that aren’t members of the S&P 500, such as private equity firm Blackstone, which isn’t eligible due to its partnership structure and whose shares are trading at lower valuations than the broad market gauge. Other nonindex plays, he favors, include private equity firm KKR and Lazard, a financial firm that advises clients on things such as mergers and capital raising.

CBS (CBS)
Buy companies with short-term problems and long-term potential: Some stocks get battered due to negative headlines and controversy that have no real long-lasting impact on their business. CBS fits the bill, Bobrinskoy says. CBS shares have been dogged by sexual harassment allegations against its CEO, Les Moonves. But the TV broadcaster’s earnings outlook remains bright for years to come. “CBS has a wonderful lineup of content,” Bobrinskoy says, adding that its recent troubles are a result of the market’s “classic short-term focus.”

ISHARES MSCI EMERGING MARKET ETF (EEM)
Buy ‘anti-bubble’ stocks: “Now’s a good time to look around and find what are cheap, or anti-bubble stocks,” says Rob Arnott, founder and chairman of investment firm Research Affiliates in Chicago. Stocks in emerging markets, such as Korea, Taiwan, India, Brazil and Indonesia, are worth a look after being “washed out” due to worries involving tariffs, the surging value of the dollar and currency weakness in economies such as Turkey. The easiest way to gain exposure to emerging market stocks is through a diversified ETF, such as the iShares MSCI Emerging Market ETF.

WATSCO (WSO)
Buy stocks that can increase sales in any economy: It’s not just the bull market that’s 9 years old, the economic expansion is, too. So investors who want to protect themselves against the next downturn should invest in companies that can increase sales in good and bad times, says Bryan Hinmon, manager of Motley Fool Global Opportunities Fund. Air conditioning and heating company Watsco is one. The HVAC player’s business benefits when air conditioning and heating systems break down and during the normal replacement cycle, Hinmon says.

VISA (V)
Buy stocks benefiting from societal trends: The transition from cash to digital transactions makes credit-card processors Visa and Mastercard good investments, says Tom Plumb, manager of the Plumb Balanced Fund based in Madison, Wisconsin. Both companies not only are at the “center of the movement” away from cash but also provide users with added levels of fraud protection and do well when consumer spending is strong, like now.

ALIBABA (BABA)
Buy beaten-up Chinese tech stocks: While the U.S.-based FAANG stocks – Facebook, Apple, Amazon, Netflix and Google parent Alphabet – have led U.S. stocks higher this year, their tech counterparts in China, dubbed the BATs – Baidu, Alibaba and Tencent – have been hurt by the U.S. trade dispute with China and the weakening of China’s currency, the yuan. That’s why Chinese e-commerce play Alibaba, which is down about 15 percent from its June high, and search engine Baidu, down 20 percent from its recent peak, are recommended picks of Plumb.

So what about the so-called FAANG names? Don’t give up on these market leaders, quite yet, Hodge says.

“They will be a huge part of the economy going forward. They aren’t going anywhere,” Hodge says. His advice: snap up shares during dips in the market.