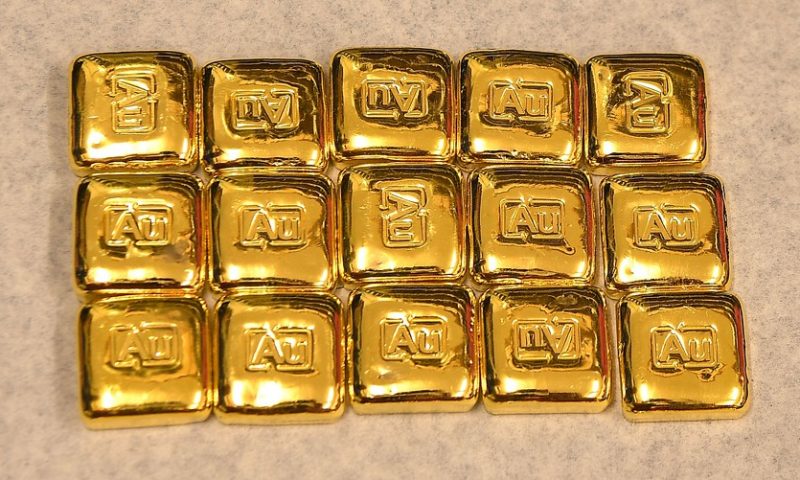 “A good rebound in the U.S. stock market this week has boosted trader and investor risk appetite, which is bearish for the safe-haven metals,” said Jim Wyckoff, senior analyst at Kitco.com.

Benchmark U.S. stock indexes climbed Thursday, with the Dow Jones Industrial Average DJIA, +0.84% up over 200 points, or 0.9% as gold futures settled, getting a lift after some better-than-expected earnings from Walmart Inc. WMT, -0.01% and Cisco Systems Inc. CSCO, -0.68% The Dow has so far given up its gain for the week.

“The yellow metal looks caught in two minds at the moment, with the break below $1,280 — a major support level this year – failing to generate the downside momentum that you would typically expect,” said Craig Erlam, senior market analyst at Oanda, in a note.

“The rebound hasn’t exactly been convincing either though and looks highly dependent on risk appetite in the markets remaining weak,” he said. “The recent correction in the dollar [was] also supportive for gold over the last few weeks but that could reverse course again, with the U.S. still in a better position that many of its peers, particularly in defensive markets.”

Bullion took a leg lower on Thursday after upbeat economic reports, with a reading of people who applied for unemployment showing that initial jobless claims, a rough way to measure layoffs, sank by 16,000 to a seasonally adjusted 212,000 in the seven days ended May 11, underscoring health in the job market.

Meanwhile, a report on home building indicated that housing starts increased to an annual rate of 1.24 million last month, the Commerce Department said Thursday, above consensus expectations of economists polled by MarketWatch for a rise at 1.21 million pace, and the Philadelphia Fed manufacturing index in May rose to a four-month high of 16.6 after registering 8.5 in April.

Traders also eyed the latest comments from U.S. Federal Reserve officials for hints on the path for interest rates.

On Thursday, Federal Reserve Gov. Lael Brainard made the case on that the “new normal” of low interest rates requires the central bank to let inflation run hotter than usual. Separately, Minneapolis Fed President Neel Kashkari said the Fed in the current recovery has treated the 2% inflation target as a ceiling instead of a target.

Gold had found support earlier in the week from modest, haven-related demand as investors kept an eye on an escalating U.S.-China tariff battle and rising tensions in the Middle East. Stocks, however, have subsequently managed to claw back some lost ground as anxieties about tariffs have receded for the moment.

“There is also no more additional bad news from the trade-war front. If gold continues to fall then $1282 will be the key support to watch,” Chintan Karnani, chief market analyst at Insignia Consultants, based in New Delhi, told MarketWatch.

In a note, they argued that Chinese policy makers “are likely to offset downside risks imposed by trade tensions with easing measures which tend to disproportionally benefit metal-intensive sectors such as property and infrastructure. Therefore, the macro implications for metals demand are still manageable and copper looks cheap at current levels.”