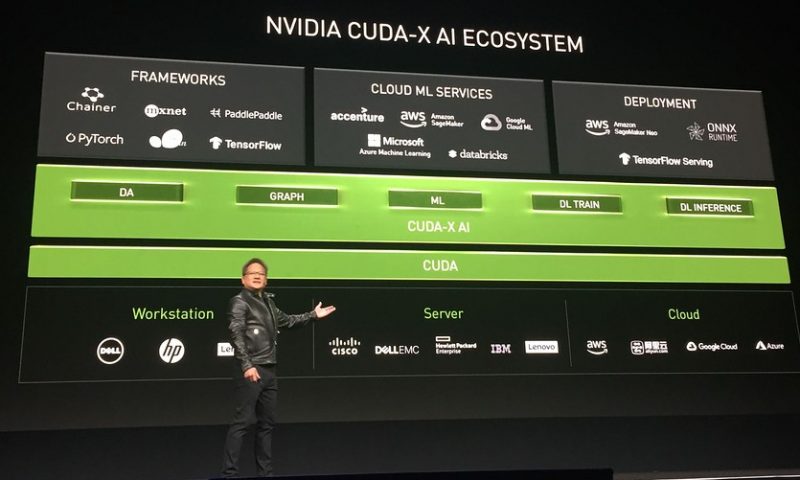 After weak server-chip sales from Intel, Nvidia will be a test of potential industry-wide slump

Nvidia Corp. is about to be a test case for a potential cloud slowdown, after earlier earnings reports from chip makers indicated an industry-wide slump in data-center sales.

When Nvidia NVDA, -0.54%  reports fiscal third-quarter earnings after the market closes Thursday, many analysts are concerned the chip maker’s server-chip sales will suffer the same weakness cited by Intel Corp. INTC, -0.09%  in the chip giant’s late-April earnings report. Intel said that “data-center inventory and capacity digestion” had been worse than the company had forecast in January, with demand from China falling off.

At Nvidia’s annual conference in March, the chip maker showcased its data-center strength and announced that Amazon.com Inc.’s AMZN, -0.01%   Amazon Web Services had adopted its latest server chips for its data centers. Earlier in March, Nvidia said it was acquiring Mellanox Technologies Inc. MLNX, -0.13% for $6.9 billion in a bid to double-down on its data-center bet.

Stifel analyst Kevin Cassidy, who has a hold rating on Nvidia, said he thinks the company will have trouble meeting its full-year guidance for revenue because of data-center softness.

“We believe that recent earnings commentary indicates that spending could continue to be slow through the first half of CY2019, especially given Intel’s reports of greater-than-expected inventory and capacity digestion headwinds in China,” Cassidy said. “In our view, Chinese data-center customers likely built inventory in 2018 due to trade concerns.”

Analysts polled by FactSet expect data-center sales to decrease 5.1% to $665.1 million from the year-ago period.

Earnings: Of the 31 analysts surveyed by FactSet, Nvidia on average is expected to post adjusted earnings of 62 cents a share, down from 90 cents a share expected at the beginning of the quarter and $1.98 a share reported in the year-ago period. Estimize, a software platform that uses crowdsourcing from hedge-fund executives, brokerages, buy-side analysts and others, calls for earnings of 87 cents a share.

Analysts expect third-quarter gaming revenue to drop 46% to $937.2 million from the year-ago quarter; professional visualization sales to rise more than 15% to $289.9 million; and “OEM & IP,” or original equipment manufacturers and intellectual property, revenue to drop 69% to $121.4 million. Auto sales are expected by analysts to rise 13% to $163.8 million. Recently, Nvidia tussled with Tesla Inc. TSLA, -0.35%  over statements the electric-car maker said about its own self-driving-car chip versus Nvidia’s.

Most analysts expect soft data-center numbers. Oppenheimer analyst Rick Schafer, who has an outperform rating and a $190 price target on Nvidia, said he expects data-center sales “to remain sluggish near term as hyperscalers digest capacity.”

“We however expect data-center revenue to be down q/q in July as hyperscalers still digest what was installed last year, consistent with INTC’s commentary and the hyperscalers’ own commentary,” Caso said. “We view data center as the biggest risk into the report. However, graphics is larger than data center, which helps overall revenue into July.”

Susquehanna Financial analyst Christopher Rolland, who has a positive rating on Nvidia and a neutral rating on Mellanox, also called data-center sales Nvidia’s “biggest risk to the print.”

“For Gaming, we expect management’s narrative to focus on a return to normalcy post the ‘crypto-hangover,’ as we believe GPU inventory levels are approaching reasonable levels (another quarter?) and as their latest midstream cards (GTX 1660/1650) ramp into the channel,” Rolland said.

Investors ‘well-hedged’ against stock-market tumble, but not betting on trade breakdown: fund survey